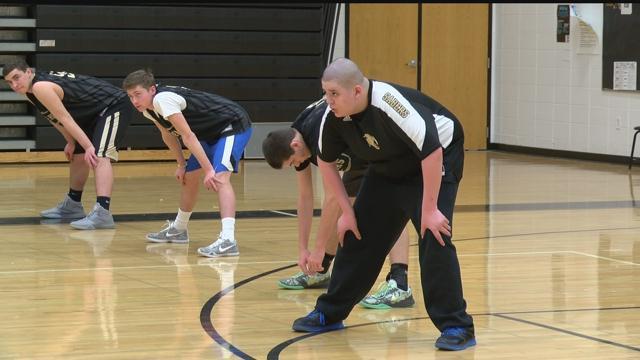 For some, high school can be a difficult time, especially for teens with a disability.
In Franklin, one member of the basketball team is facing and overcoming new challenges every day.

There's something really special going on inside of Franklin high school. One student is not only changing the face of the boys basketball team, he's also got the community rallying around him.

Come to just one practice and its clear. David Zakrzewski is so much more than just a basketball team manager.

"David, you getting on that bus tomorrow at 5:30? Yes you are" said Coach Tyler Podoll.

Born with a genetic disorder that has many of the characteristics of autism, this high school senior has had his share of challenges but this school isn't one of them.

"He's very outgoing and wants to be a part of everything," said mom Jean Zakrzewksi.

His parents say its thanks to David's best friend since 4th grade, Ben Wachter, who just so happens to be the school's quarterback, who helped him land a spot on the basketball team.

"He said he wanted to try out for the basketball team and I called our older coach and he said yeah he can be a manager," said Wachter.

David is part of every aspect of this team; he's out there practicing with the guys, cheering them on at their games and the coaches say they hold him just as accountable as they would any other player.

Filling his role with such passion, he was rewarded with a special tip off at "senior night."

A dream fulfilled in front of a community so proud to see him succeed.

"It went crazy loud in here and everyone was so happy and proud. To get him to see...He'd been working the whole season for that moment. It was incredible," said Jean.

No matter where he ends up, one thing is certain: David will have teammates for the rest of his life.