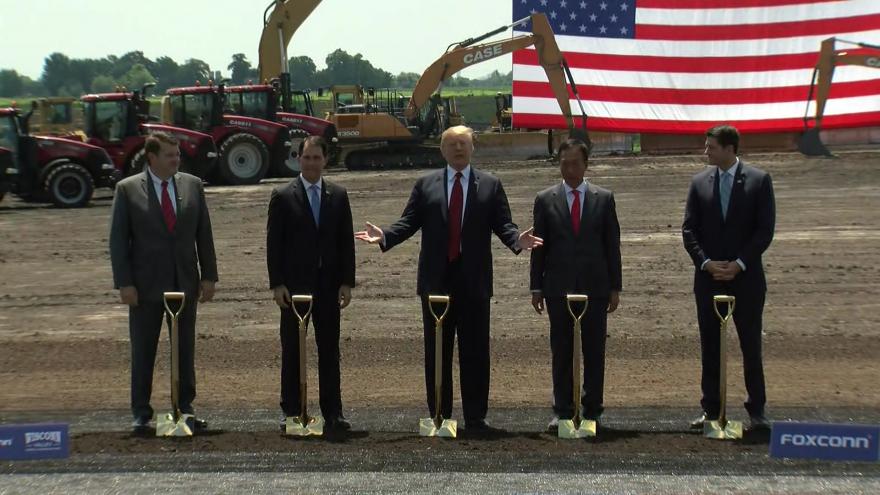 MOUNT PLEASANT, Wis. (CBS 58) – After news that Foxconn is changing its plans for a project in Mount Pleasant from more manufacturing jobs to research and development, local leaders are responding.

Village of Mount Pleasant President David DeGroot, Racine County Executive Jonathan Delagrave and Jenny Trick, Executive Director of the Racine County Economic Development Corporation issued a statement Wednesday after the report touting the investment Foxconn has already made in the region and the commitment the electronics manufacturer has already made.

The statement said in part, "Contrary to what was reported by Reuters, Foxconn reiterated to us, today, its commitment to building an advanced manufacturing operation in Wisconsin, in addition to its commitment to create 13,000 jobs and invest $10 billion in Racine County."

To date, Foxconn has invested over $200 million in Wisconsin. We have seen much of this locally – including Foxconn’s investment in more than $100 million in construction contracts that have transformed the project site, the completion of the first 120,000 square foot building on the campus and the entire 3 million square foot pad that will serve as the base for the next phase of construction, which will begin in Spring 2019.

Contrary to what was reported by Reuters, Foxconn reiterated to us, today, its commitment to building an advanced manufacturing operation in Wisconsin, in addition to its commitment to create 13,000 jobs and invest $10 billion in Racine County. As Foxconn has previously shared, they are evaluating exactly which type of TFT technology will be manufactured in Wisconsin but are proceeding with construction on related manufacturing, assembly and research facilities on the site in 2019.

We understand that Foxconn must be nimble in responding to market changes to ensure the long-term success of their Wisconsin operations. We fully expect that Foxconn will meet its obligations to the State, County and Village.

Both the local and state development agreements are legally binding and include strong protections for taxpayers. The state agreement, which was largely based on job creation, ensures that Foxconn only receives state tax credits if it meets or exceeds its targeted hiring amounts in any given year.

The local development agreement stipulates that, if, for any reason, Foxconn’s investment on the campus falls short, the company remains obligated to support a minimum valuation for the project of $1.4 billion, which will more than pay for all public improvements and development costs for the project.