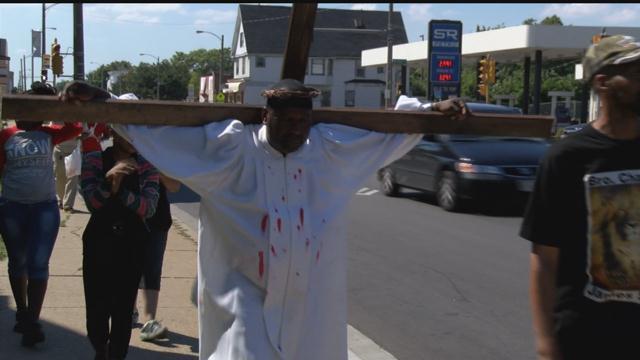 Only CBS 58 was on scene Saturday afternoon as Pastor Dwain Berry dressed as Jesus and walked from 12th and Burleigh to 21st and Center.

That distance is at least a good mile walk, in the hot sun, fully dressed and carrying a huge cross.

The local pastor is addressing violence in the city of Milwaukee and nationwide.

Berry says part of the blame for Milwaukee’s violence falls on the faith community not doing its part in reaching out to people who may be heading in the wrong direction, “My feeling is the churches failed. To be on the streets, to get out of the walls of the church instead of preaching in the pulpits, to practice what we preach and be out here in the highways and the hedges compelling men to Jesus. I think a lot of the homicides are a lack of religion.”

Pastor Berry plans to carry his cross from Milwaukee to Racine in late September.