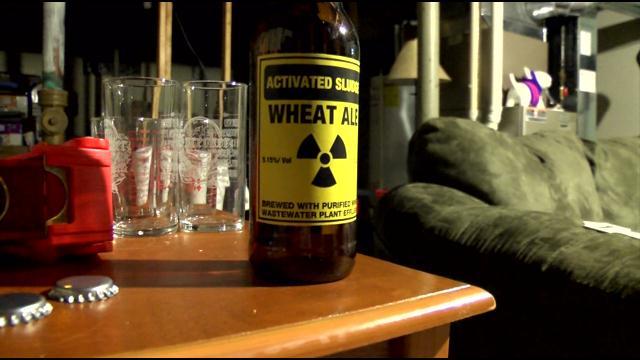 It doesn't sound very appetizing. Beer made from something the experts call \"activated sludge\" but those who've had it say, it's actually pretty good.

\"Waste water affluent is not as dirty as people think it is and if we can treat the water to the point where it can be consumed then there's so much more we can do with it,\" he said.

Ratarasarn isn't your typical brewer, either. He's a waste water and drinking water engineer so he knows this stuff is safe to drink.

The water is distilled and boiled for ninety minutes.

\"I send it out for testing. Heavy metals, inorganics, pesticides and it came back as pure water,\" said Ratarasarn.

\"Wheat beer is a light beer, it's not a dark beer so people wont associate it with waste water and it's something that I like,\" he said.

And for beer made from waste water, it's not half bad. President of Milwaukee favorite Lakefront Brewery Russ Klisch tried it and he agrees.

\"It was good beer. It was a good home brew and compared to some commercial varieties it was as good or even better than some of the ones out there,\" Klisch said.

One thing is for sure, it's the first of it's kind across the nation. Ratarasarn is the first to try out the idea of reusing water.

Ratarasarn admits it's not for everyone.

\"Some people drink it some use it as a paperweight,\" he said.

But Ratarasarn's hoping his idea takes off.

\"I have plans but we'll see how well it goes. I have some ideas I still have to work out. And we'll see. Nobody knows where this is going to go,\" he said.

He hopes to start a conversation across thnation aboutut recycling water.