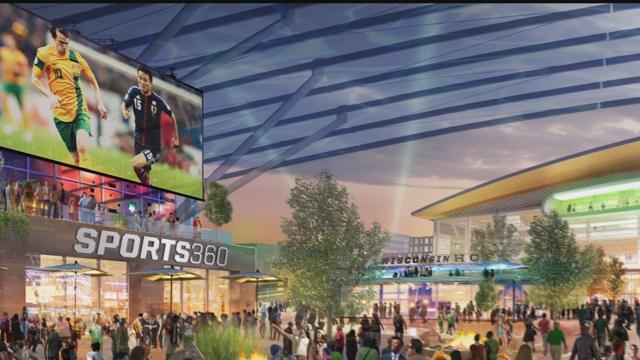 The city and county are both taking different approaches to fund their share of the new arena.

But what matters most to those like Seth Wasserman, is making sure the numbers add up because he can't imagine a Milwaukee without the Bucks. The fan is a manager at Carson's restaurant at the corner of Juneau Avenue and Old World Third Street.

\"Rocks, a parking lot and some parking meters they just put up,\" he said of the view from inside his workplace.

He knows it's not ideal, but he's excited that it's about to change.

That, in turn, means more business for downtown eateries and bars who already attract Bucks faithful. Local leaders said the arena is a catalyst for economic development and jobs.

\"This city has a very diverse population,\" said Mayor Tom Barrett. \"I want the people who build this arena to reflect the diversity of the population in the city.\"

To get there, the city of Milwaukee will contribute $47 million, by creating a tax increment district, or TID, and paying for a parking structure. Mayor Barrett has reached out to each Common Council member and is cautiously optimistic.

\"There may be a difference of opinion, but I hope no surprises,\" he said.

\"I want to make sure there's no possibility the taxpayers of the county end up losing any of the shared revenue that's coming to them,\" said Milwaukee County Executive Chris Abele.

For Abele, the concern is collecting $4 million over 20 years through a debt collection agreement. He lobbied for it to be in the arena deal, but the Senate removed it.

Now, he must get county support to have the state collect the debt, something critics have said unfairly targets the poor.

\"If people think it's a problem that I want to be responsibly aggressive about the program, I'd simply say the more responsible we are, the more funds your money can go into what you're paying it for, which is services,\" he said.

Mayor Barrett say a committee is expected to have a hearing on the funding plan at the end of August, with a vote in early September.