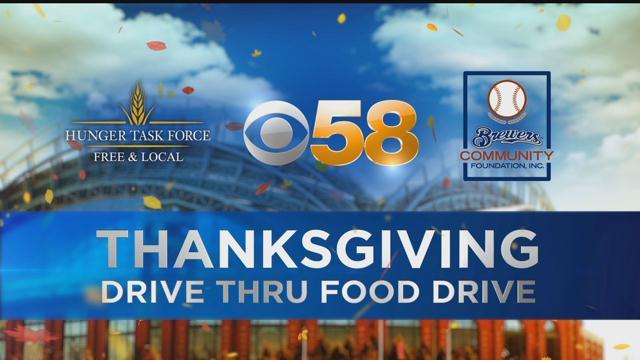 We have much to be thankful for here at CBS 58.

We had our most successful food drive ever for Hunger Task Force.

No doubt the Hank Bobble heads donated by the Brewers helped bring in the more than 130,000 pounds of food collected at Miller Park.

But local businesses also stepped up and paid it forward.

Manuel Gorrin of Nature's Path said it was a "natural" fit given the company's emphasis on health and nutritious food.

"We really feel we have to give back," added Dr. Andrew Campbell. "That's what we do at Quintessa."

For Easter Seals this was an opportunity to shine a spotlight on inclusion.

"That's  new Easter Seals," Bob Glowacki told CBS 58 viewers. "It's about being involved and people with disabilities being fully included."

ABR Employment Services drove up with a van stuffed with frozen turkeys.

Many told us they wanted to connect with their customers.

"We're always looking for a way to give back any way we can," Brian Cass of Martinizing Green Cleaning told CBS 58 News.

As we rounded the bases towards home, family owned New Pitts Mortuary brought the concept of commitment full circle.

"I don't get an opportunity to feed just one family. I get to feed Milwaukee," declared Michelle Pitts. "I count it to be an honor."