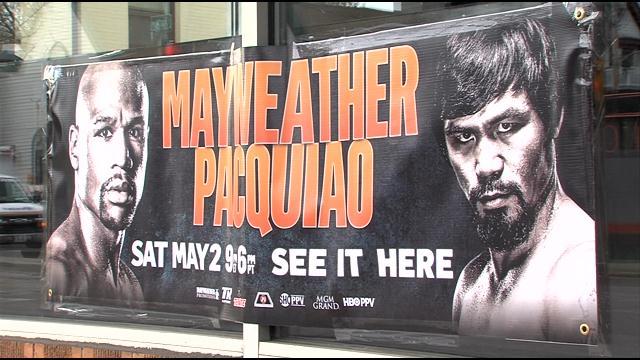 It's touted as the biggest fight of the century.

Floyd Mayweather and Manny Pacquiao had their official weigh-in Friday before the big fight in Las Vegas. Pacquiao came in at 145 pounds; Mayweather at 146 pounds.

But it's not just the fight itself that has high expectations. The much-anticipated event could bring in a record amount of money between fans and bars paying for the pay-per-view signal.

In Milwaukee, the big ticket bout left some business owners caught between the ropes because they couldn't afford it and others finding a way to show it. In the end, they hope the hype is worth every penny.

Yosef Goldstein owns the newly-opened Buddha Lounge at 1504 E. North Avenue. It's costing him $3,300 to show the fight to his customers.

He said the cost is based on capacity. Every seat, table and booth at Buddha Lounge will be filled by the maximum 99 people, who are required to shell out cash too.

At nearby Champion's Pub, 2417 N. Bartlett Avenue, owner Bobby Greenya couldn't pass along the cost to his customers.

He can fit 68 people inside his place.

It's a shot he knew would be long, but had to try anyway, considering he's been waiting for years to witness the heavyweight match-up.

\"I'm going to take a bunch of customers across the street and we're watching it over at my house,\" he said. \"I'm not gonna miss the fight, I'm just not gonna watch it in my favorite place to watch the fight.\"