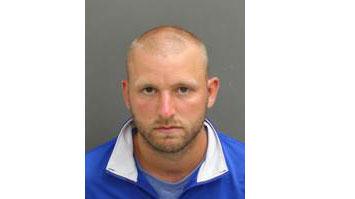 A local baseball coach, who lives in Oak Creek, has been arrested in Orlando for groping of children at Disney’s Pop Century Resort over the Fourth of July.

Nicholas Groth, 26, was arrested for five counts of lewd and lascivious molestation.

Groth, who was in Orlando for Disney’s International Salute to Baseball Tournament, is being held on no bond.

A 7-year-old boy was at the hotel for a baseball tournament. He said he was playing with friends at the pool.  An unknown man placed his hands on his buttox area and squeezed.  The boy told the suspect to stop and leave him alone, but the man didn’t listen and continued his behavior.

The boy got out of the pool and told his father.  The father allegedly confronted Groth.  “Please, I didn’t do anything, I’m a 14U Wisconsin baseball coach,” said Groth. .

The number of possible victims was unclear, but three separate cases list victims under 12 years old and one between from 12 to 15.

The Sheriff's Office said to CBS Orlando the children identified Groth from a photo and also spotted him after being taken to a baseball field at Disney.

Groth is being held at the Orange County Jail in Florida with no bond.

CBS58 stopped by Groth's home in Oak Creek. Neighbors say Groth kept to himself. They were surprised to hear the news.

Groth is a coach for Rally Baseball and a second grade teacher at Willow Glen Primary School. At this point, the district has not returned CBS58's calls regarding the charges.

A scheduled practice for Rally Baseball for a team that is not at the Florida tournament took place Thursday night.

A parent/coach at the practice location said they would inform parents and players about the incident before practice.

Parents tell us Nicholas ran most of the league, and before starting practice, parents, coaches, and players all had a discussion about what happened.

"All the kids came with family. I am meeting with my team tonight," said Baer.