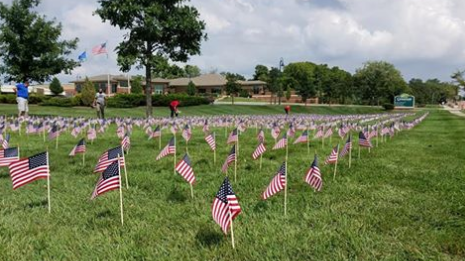 WAUKESHA - In downtown Waukesha, dozens gathered around a steel beam which is a portion of the North Tower that fell on September 11th. It was a sight that Jessica Osenbrugge watched from the ground in New York City.

"There were people running around, screaming and panicked. On the street were thousands of people and I saw the fire from the North Tower," she said.

While she survived, nearly 3,000 others didn't including a 25-year-old West Bend woman. Andrea was stuck on the 92nd floor when the first plane hit. Osenbrugge's non-profit was able to obtain the steel beam in her honor. "We want people to have the ability to have this living breathing history from New York and to connect to it."

Outside Greenfield Fire Station 91 was another powerful display. 2.977 flags are planted in the ground to represent each person killed that day.

"It's really chilling when you realize that each one of these flags represents a human that was killed during the tragic events," said Chief Jon Cohn with the Greenfield Fire Department.

These are a pair of memorials, dedicated to those lost, and ensuring that communities will never forget that day.

"This is about remembering, and commemorating, and reflecting, and knowing that for many families, across the nation and across the globe, there's still somebody that's missing at the dinner table each night."