Listeria: What is it, how do you get it, and what's the risk? 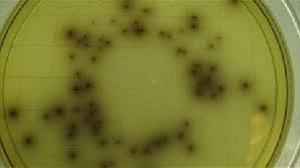 The recalls have hit every corner of the grocery store: Ice cream. Pizza. Apples. Hummus.

The latest on the list is Blue Bell Creameries, which has yanked every one of its products due to Listeria monocytogenes.

The company is recalling its entire line of ice cream, frozen yogurt, sherbet and other frozen snacks because they could be contaminated with Listeria, the Blue Bell said Monday.

\"Today's decision was the result of findings from an enhanced sampling program initiated by Blue Bell which revealed that Chocolate Chip Cookie Dough Ice Cream half gallons produced on March 17, 2015, and March 27, 2015, contained the bacteria,\" the company said in a statement.

\"This means Blue Bell has now had several positive tests for Listeria in different places and plants.\"

Here's what you need to know about the bacteria, and what happens if you get it:

Listeria monocytogenes is a hardy bacterium that is resistant to extreme hot and cold. This bacterium is pathogenic -- meaning that it is infectious to humans, causing the illness listeriosis.

Where does it come from?

Listeria is found in soil, water and the intestines of some animals. But most animals who have it show no symptoms, so the bacterium can get transferred to raw foods such as unpasteurized dairy products, raw vegetables and raw meats.

But unlike other types of bacteria, Listeria can still grow in the low temperatures of a refrigerator. And when Listeria gets into a factory environment, it can live for several years, the U.S. Food and Drug Administration says.

Studies suggest that up to 10% of humans may be carriers.

Who is most at risk?

Listeriosis primarily affects the elderly, pregnant women, newborns and people with weakened immune systems. In the U.S., an estimated 1,600 people become seriously ill each year. And about 16% of those illnesses result in death.

Cervical infections caused by listeriosis in pregnant women may result in spontaneous abortion during the second or third trimesters or stillbirth.

What are the symptoms of listeriosis?

The early symptoms of listeriosis are similar to those of the flu with nausea, muscle aches and a high fever. Gastrointestinal symptoms such as diarrhea may also appear.

But the length of time between infection and the appearance of symptoms is unknown.

How can I protect myself?

Recommendations for keeping food safe from Listeria are similar to those used to protect against other foodborne illnesses. Remember to cook meat to the USDA's recommended temperatures and to wash all raw vegetables and fruit.

Keep your fridge below 40 degrees Fahrenheit, and eat leftovers within three to four days, the Centers for Disease Control and Prevention says.

Has this happened before?

In March, Amy's Kitchen Inc. recalled almost 74,000 cases of its products -- from vegetable lasagna to spinach pizza to tofu scrambles -- that could contain the bug.

And in January, three companies issued voluntary recalls of caramel apples after seven people died from apples that may have been infected with Listeria.

How common is Listeria infection?

About 800 cases of Listeria infection are diagnosed each year in the United States, along with three or four outbreaks of Listeria-associated foodborne illness.

A multi-state outbreak of Listeria from contaminated hot dogs and deli meats occurred in 1998, killing 21.

Between 1998 and June 2009, 48 deaths from Listeria-caused illnesses were reported by the CDC's Foodborne Outbreak Online Database.

What happened in the Blue Bell case?

So far, Blue Bell has documented five cases of listeriosis in Kansas and three cases in Texas.

The Kansas Department of Health and Environment said three people have died from Listeria over the past year, possibly due to Blue Bell products.

All five of the people who got sick in Kansas had been patients at the same hospital, and most of them consumed ice cream while being treated for unrelated causes, the health officials said.

\"We're committed to doing the 100 percent right thing, and the best way to do that is to take all of our products off the market until we can be confident that they are all safe,\" Kruse said.

\"We are heartbroken about this situation and apologize to all of our loyal Blue Bell fans and customers.\"