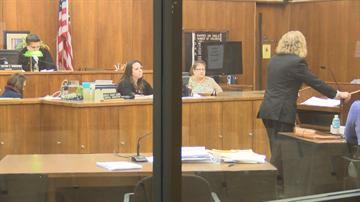 MILWAUKEE -- Tuesday afternoon, prosecutors called the environment a Milwaukee man created a \"house of horrors.\"  He's accused of sexually abusing five of his biological daughters.  The state would get one more chance to show the jury how he did that.

But first, the defendant who we refer to as E.B. to protect the family's identity, got one more chance to be present in court for closing arguments.

E.B. had been acting as his own attorney until his repeatedly rude behavior caused him to lose that right last week.  Nothing about his behavior changed on the last day of arguments.  E.B. was kicked out of court again.

\"He is the worst, period,\" Judge David Borowski said.  \"It's not close.  He is belligerent.  He shows contempt for every proceeding.\"

It took more than two hours to get through jury instructions.  That's because there were 32 felonies to cover, including incest, sexual assault and child enticement.  Tuesday afternoon, lawyers gave their closing arguments.

Prosecutor Sara Lewis thoroughly recapped witness testimony, including the five daughters' statements, painting them as fearful for their lives.

\"All of [the testimony] is consistent, it's believable, the evidence is overwhelming,\" Lewis said.  \"It's the state's belief you will find this defendant guilty.\"

Defense counsel Scott Anderson conceded E.B. was strict, but that the daughters made up the sexual abuse because they were tired of his discipline.

\"Within the context of what was going on in that house, [the daughters] have a motive to falsify and get away from what they thought was, admittedly so, was an oppressive father,\" Anderson said.  \"But that's just the way he was.\"

The jury now has those 32 counts to consider.  They started deliberating around 4 p.m. Tuesday afternoon and will reconvene Wednesday morning.