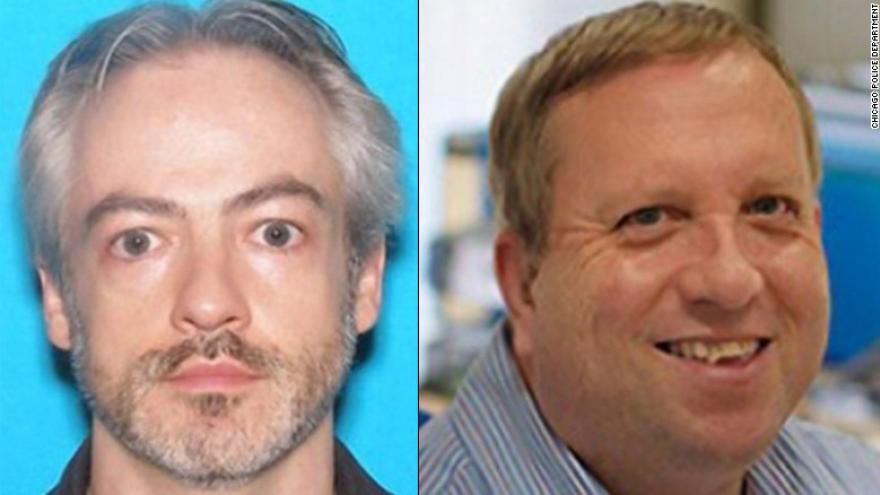 (AP) — Far from their prestigious campuses, a Northwestern University professor and a University of Oxford finance officer were jailed in the San Francisco area Saturday after eight days as fugitives sought in the death of a young hairdresser in Chicago stabbed repeatedly until the knife broke, police said.

The Northwestern microbiologist, Wyndham Lathem, had a personal relationship with the victim, although the nature of it wasn't clear, and Lathem had made a video apologizing for what he called "the worst mistake of my life," police said.

Lathem, 42, was being held without bail in Alameda County and faced a court appearance in the city of Pleasanton. The other suspect, Andrew Warren, a treasury assistant at one of Oxford's residential colleges in England, was being held at the county jail in San Francisco.

Both men surrendered separately and peacefully in the Bay Area on Friday evening.

They had been fugitives since the body of 26-year-old Trenton James Cornell-Duranleau was found in Lathem's Chicago apartment on July 27.

Police said Lathem had a relationship with Cornell-Duranleau, who moved to Chicago from the Grand Rapids, Michigan, area after receiving his cosmetology license. They have not elaborated on how Cornell-Duranleau or Lathem knew Warren, or if Warren knew them before he arrived in the United States.

Chicago police said Warren was 56; he was booked into jail as age 49.

A deputy U.S. marshal said Lathem's surrender came after fast-paced negotiations through an attorney that led to the fugitive turning himself in at the federal courthouse in Oakland.

No guns were drawn, but Lathem was ordered to carefully step out of the vehicle and was taken into custody in a courtyard area, Conroy said.

According to Conroy, Lathem stated that he would not answer questions on the advice of a lawyer, and no questions were asked.

Police said Lathem had sent a video to friends and relatives apologizing for his involvement in the crime, which he called the "biggest mistake of my life." The video raised concern among investigators that Lathem might kill himself.

"We are also thankful both men are safely in custody and this did not end in further tragedy," a police statement said.

Warren arrived in the United States three days before Cornell-Duranleau's death. He and Lathem were seen in surveillance video leaving Lathem's high-rise apartment building the day of the stabbing.

In a bizarre twist, police said that on that same day, before the body had been discovered, Lathem and Warren drove about 80 miles (128 kilometers) northwest to Lake Geneva, Wisconsin, where one of them made a $1,000 cash donation to the public library there in Cornell-Duranleau's name. Lake Geneva police said the man making the donation did not give his name.

"I've never seen where suspects in a homicide would make a donation in the victim's name," said Lake Geneva police Lt. Edward Gritzner.

On the night of the slaying, police said the front desk of the building where Lathem lived in Chicago's trendy River North neighborhood received an anonymous call from a person who said that a crime had been committed in Lathem's 10th floor apartment. When police opened the door they found Cornell-Duranleau's body.

Police also said that by the time they found the body on the night of July 27, Cornell-Duranleau had been dead for 12-15 hours