Large Turnout in the May Day March in Milwaukee 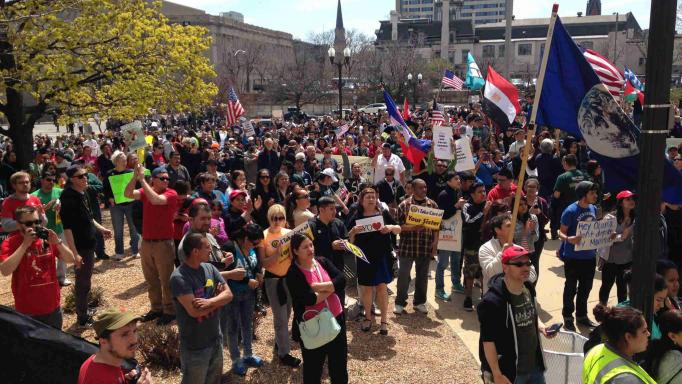 Hundreds participated in May Day 2015 in Milwaukee with a strong message to state and national politicians. It started at the Voces de la Frontera's offices on 5th street in Miwaukee's south side and ended at the County Courthouse.

Demonstrators called on Governor Scott Walker to withdraw Wisconsin from the 26-state lawsuit delaying the implementation of executive immigration relief, according to the organization. They also asked for living wages and the right to organize in the workplace, for increased funding for public education, and for an end to police violence against African-American communities.

\"You can just feel the energy and the optimism,\" said Christine Neumann-Ortiz, executive director for Voces de la Frontera. \"Really celebrating how far we've come and really feeling the strength of their unity and solidarity and it came across very clearly.\"

It marked the 10th annual May Day March and this year they invited Elvira Arellano. She was named Person of the Year in 2006 by Time Magazine after she took refuge in a church in Chicago when she faced deportation.

“It's important that the community hears my story,” Elvira said. “I have faith that fighting and only with fighting and marching, we will accomplish social change.”

She marched alongside her two children. Saul Arellano is Elvira's 16-year old son.

\"We've been through a lot together,” Saul said. “She inspires me to be a better person and to always be in the struggle and fighting for the people.\"

May Day coincides with International Workers' Day and people of all backgrounds showed their support.

\"We believe it's a human right and it's a right we need to fight for to make sure everybody regardless of their status has equal access to quality care in our community,” said Candace Lowden with the Wisconsin Federation of Nurses and Health Professionals.

\"Really to keep going and keep building for immigration reform with a path to citizenship and making sure that the things that we need for all working class families in Wisconsin, the good jobs, affordable public, accessible public education, those are the same opportunities that we have for our own families and everyone else's, that's what people are committed to,\" Neumann-Ortiz said.

We reached out to Governor Scott Walker's office but we didn't receive his response to Voces de La Frontera's comments about his stance on immigration.