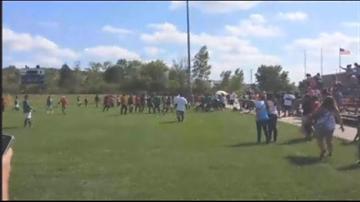 FRANKLIN -- Several people were injured in a large fight at the Milwaukee County Sports Complex.

Police say the fight started during a soccer match at the complex August 31.

A witness tells CBS 58 that the fight started between a man and a woman, but quickly grew into a violent brawl when people began throwing beer bottles. About 50 people were involved, according to a witness.

At least four people were injured, including one man who was knocked unconscious.

No arrests were made and spectators were allowed back inside the complex.