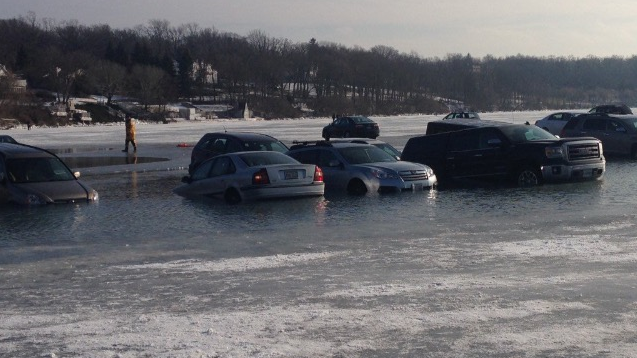 The unoccupied vehicles were parked on Lake Geneva across the street from the snow sculptures when they began breaking through Saturday.

Assistant Chief Pat Heindl commented, “These cars and trucks were parked together on the ice by people attending Winterfest.  Warmer temperatures and the weight of the vehicles caused the ice to give way.  Our first priority was life safety.  We’re glad no one was injured.  Our fire personnel suited up in survival suits to hook vehicles so they could be towed out.  We train regularly for ice rescue involving people in through the ice.   We used our same procedures to safeguard our crews as they worked to get the cars out.  This was a cooperative effort with the Police Department and the tow truck operators.  This was a long day, under tough conditions, but our crews did a great job.”

At least 10 cars were totaled after falling through the ice at Lake Geneva.

It happened during the annual Winterfest celebration, which draws thousands of people to the lake-front community.

Despite warning signs, hundreds of cars park on the ice each year.

This year, warm weather caused the ice to be unstable, sending 15 cars into the lake. At least 10 are being deemed a total loss.

One of those belongs to Laurie Oberhelman, who was visiting the festival for the first time.

"We were coming in and there were a lot of cars and not a lot of parking spots, and we looked and I said oh look there's plenty of cars parked on the lake. People park on the lake all the time from what I understand so let's do it," she says. "It was a bad choice."

Renner Larson was there when it first started, and says the process happened very slowly.

"As the ice bent downwards, water started coming up, and cars went in front-end first," he says. "Then water came up, and they slid in a little bit more."

Dive teams worked to remove the cars one by one, as thousands gathered to watch the situation unfold.

Police say nobody was injured, despite numerous people running to their cars as the ice caved in.

"Fortunately it's only a property issue right now, and nobody was injured or in the vehicles when they started to submerge. So it's a bad day, but a good day at the same time," says Lt. Ed Gritzner.

Signs are posted warning drivers to venture onto the ice at their own risk. Gritzner says the drivers of those vehicles will be responsible for all property damage.