Kindergartner Threatened with Paddling at School 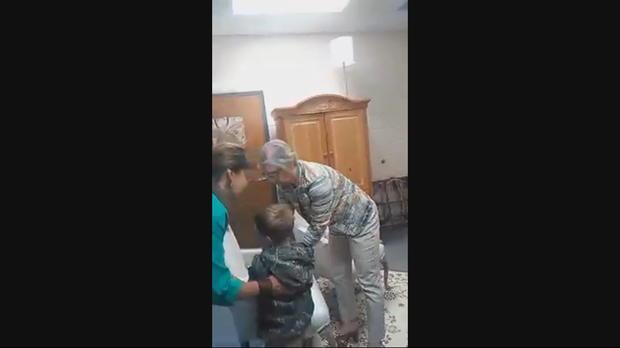 She secretly recorded as the boy was held down and threatened with a wooden paddle at his school, southeast of Atlanta. The video - which shows him apparently trying to escape the paddling -- has more than a million views on Facebook, reports CBS News correspondent Mark Strassmann.

"What happened at that school Wednesday was not a paddling, it was not a spanking. It was abuse," said his mother, Shana Parez.

The principal and assistant principal said they were punishing her son, Thomas, with a paddle because he got into a fight and spit on another student.

The two administrators from Jasper County Primary School tried to get the kindergartener to stand still.

"I'm only going to do it one time... unless you wiggle around," the school administrators tell him in the video.

The administrators can be heard laughing while restraining his arms.

"Don't spank me," Thomas tells them.

"You're going to get spanked now," one of the administrators says.

"We've got all the time in the world, don't we?" says the other.

Perez said she was told to allow the punishment, or he would be suspended and that suspension would have put Perez behind bars.

"It was either let them paddle him or go back to jail for truancy," Perez said.

Perez said she was arrested two weeks ago because her son had 18 unexcused absences.

Jasper County Schools said: "When corporal punishment is used, it is with parental consent. The District is investigating the incident and looking into its' discipline policies."

"In the state of Georgia, corporal punishment is not a crime," said Jasper County Sheriff Donnie Pope.

Nineteen states, including Georgia, allow children to be hit in public school. In many places, parental permission is required.