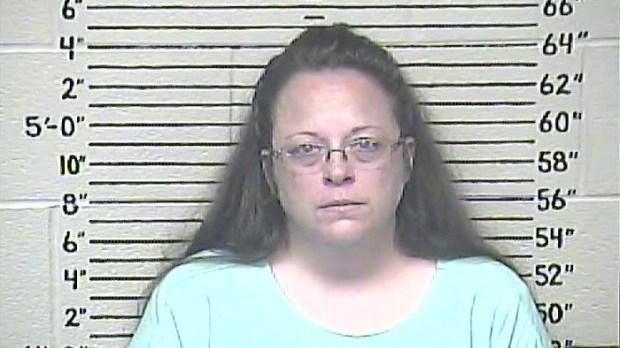 LOUISVILLE, Ky. (CBS NEWS)-- Kentucky clerk Kim Davis, who spent five days in jail for defying federal court ordersand refusing to license same-sex marriages, was given tickets to the president's final State of the Union, an invite-only event for members of Congress.

But who invited her and her attorney remains a mystery.

Every lawmaker gets one guest ticket to President Barack Obama's annual speech, though congressional leaders get extras.

First lady Michelle Obama, on the other hand,invited Jim Obergefell, the lead plaintiff in the case in which the United States Supreme Court effectively legalized gay marriage across the nation. He will sit in the box with the first lady and Jill Biden, the vice president's wife.

After the Supreme Court's decision, Davis, the clerk of Rowan County, cited "God's authority" and refused to issue marriage licenses, despite a series of federal court orders.

She quickly became a darling of the religious right. Politicians, including presidential candidates Ted Cruz and Mike Huckabee, flocked to a rally on the jailhouse lawn during her brief stint behind bars.

Still, no one has claimed to have extended the invitation

The Family Research Council, a conservative organization that opposes gay marriage, arranged the invitation, said spokesman J.P. Duffy. That group also declined to identify the lawmakers who gave them passes.

Staver said they would be sitting in the House chamber "to stand for religious freedom and to represent Judeo-Christian values."

"I think when it became more clear that President Obama was going to tick off his so-called accomplishments in the last seven years, the decision was made to invite Kim Davis to be a visible reminder that his policies have not encompassed all of American citizens and, particularly, Kim Davis with respect to religious freedom and marriage," Staver told The Associated Press. "So she's there as a visible reminder of that, his policies have actually hurt religious freedom and marriage and to encourage people to stand for these values."

As CBS News' Stephanie Condon reports, the annual address, typically delivered before a joint session of Congress, usually gives the president an opportunity to encourage Congress and the American public to embrace his policy agenda. However, for a president at the end of his second term, the State of the Union gives him a chance to define his legacy in his own terms and make the case that the next president should build on that legacy.

President Obama intends to do that by arguing that he has left the United States poised for a bright future.

"There is no country in the world that is better positioned to capitalize on the kind of opportunities we see, whether it relates to our national security or it relates to our economy than the United States of America," White House spokesman Josh Earnest explained Monday.

"That ultimately is the essence of the message the president wants to deliver, precisely because the next president needs to understand that, and the American people need to understand that," he continued. "They need to have an accurate assessment of what our challenges are, what the risks are out there. But also to have an adequate understanding of what opportunities are available so that we do not miss them and we are at a critical juncture in our history that we've spent seven years digging out of the worst economic downturn since the Great Depression."

While Mr. Obama will urge the nation to seize the opportunities his administration has created, he won't dwell on making the final "victory lap" that's expected of an outgoing president, Earnest insisted.

"If the president wanted to give a speech about what the president has been able to do over the last seven years, we'd have plenty to talk about," the White House official said. "But the president is still writing a speech that is not about him. It is about the American people and about the future of our country and about how our kids and their kids are going to fare."