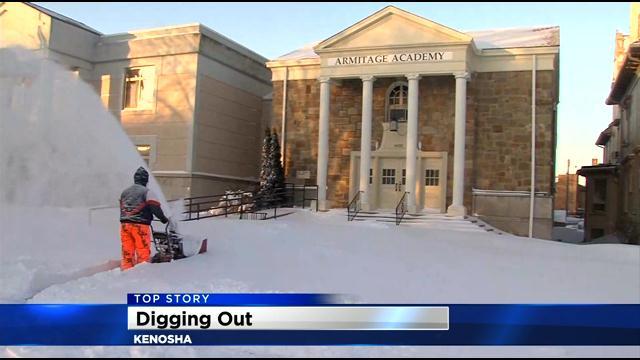 The City of Kenosha is getting all of its workers to lend a hand in clearing the streets. They say once you get the hang of driving a plow, it's so easy, even a librarian can clear the roads.

John Prijic, Kenosha Streets Superintendent says, \"The City of Kenosha does not quit. It's not in our vocabulary.\"

But every big storm brings a simple math problem Prijic needs to solve: He has 45 plow trucks and only 31 workers. The fix? Train about 100 current city employees, anyone willing to learn to drive the plow.

Prijic says, \"We needed help and we wanted to do it in an economical way where it was effective, but yet cost effective.\"

People already on the payroll are public works employees, parks department employees, secretaries, even a library employee have passed written and behind-the-wheel tests. They got their commercial driver's license to help with major storms for the last 20 years.

\"I think everyone in the city wears a different cap and when they're called upon they go do it.\"

Johnson says, \"I've driven snow plows and dump trucks, but nothing with a big plow, big wing, and a salter on the back.\"

Johnson gets paid his standard salary during an 8-hour plow shift, plus any overtime. Department rules don't allow him to plow within 12 hours of his shift at the firehouse. For Johnson, it's simply another way to help the people he protects.

Johnson says, \"People have to get to work and they gotta get their streets plowed.\"

The city says having employees plow is half the cost of hiring contractors.