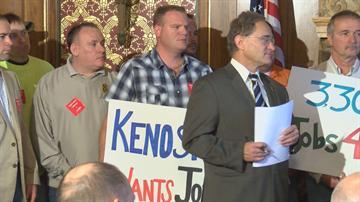 Ready to work.  Several dozen of those laborers joined politicians, contractors and business owners at the Capitol in Madison Thursday, urging Walker to approve the Menominee tribe's $800 million casino.  They see money to be made, especially from visitors.

\"I would say over half of those customers are coming from Illinois,\" Kenosha business owner Mike Bjorn said.  \"They're coming now because they know their money goes further in Wisconsin.\"

But to get the casino built takes the governor's approval, something the governor is taking his time with.  Walker initially said he'd decide last friday, but nearly a week later, we're still waiting.

\"We were encouraged on Friday, because we thought a quick decision might go the other way, but to try to read the governor's mind by day-by-day assessments, it's hard to tell,\" Kenosha Rep. and House Minority Leader Peter Barca said.

\"The tribe and the state each separately reserve all rights to take any and all actions in support or in opposition...\"

The tribe added, \"Despite claims to the contrary, the Potawatomi have never entered into a state gaming compact agreeing to the Menominee's operation of the Kenosha casino.\"

Kenosha-area leaders think the governor set his standards too high.

\"If you asked elected officials if you'd like to run opposed next year, almost all of them would say yes, right,\" Racine Rep. Cory Mason said.  \"Everybody would love to avoid competition.\"

It seems the Potawatmoi and Ho-Chunk are set on doing that.  And as the governor ponders, thousands of workers wait.

\"The day after his decision, we'll be on to other things, but we do hope he makes the right decision in this case,\" Kenosha Mayor Keith Bosman said.  \"There's a lot in the balance here.\"