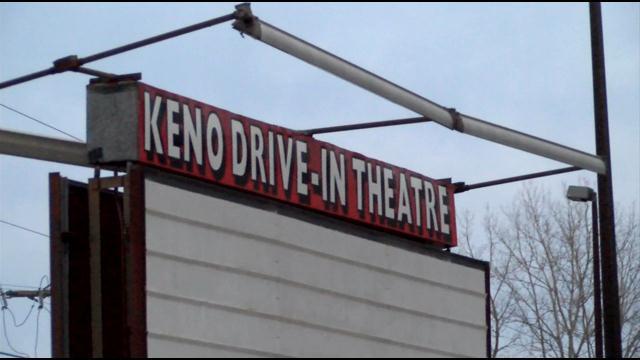 \"It's privately owned land and the village can't tell someone how to develop their land,\" said village communications officer Chris Christenson.

It's not bad business or the switch from film to digital that would close the theater.

\"The Keno has been there a very long time. But at this point, he's interested in pursuing something else with his land,\" said Christenson.

The village has created three proposed uses for the space with plans for residential and commercial land.

One, favored by the land owner, plans for  one large, 150-thousand square foot retail space...With no room for the drive-in.

John Oldham has lived in Kenosha nearly his whole life and he's fighting back. he's launched a Facebook campaign: \"Save the Kenosha Keno Drive-in, April 2015.\"

\"I came here as a teenager, late teens and as adults we brought my six children here very frequently. We now have 16 grand kids and we want them to be able to enjoy what we've enjoyed for years,\" said Oldham.

One of the biggest concerns is losing a piece of history in southeastern Wisconsin. The theater has been open since 1949 and has played a big part in many people's lives.

\"I was told to shut it down. We're not going to open this season, that's the directive I've been given,\" said Keno Drive-In owner Jeffrey Kohlberg.

Kohlberg leases the property from someone else. He says it means a lot to him too, because his family has been in the business since the 1950's.

And if it was up to him, it would stay open.

\"We would continue to operate the drive-in in the future, if that was the desire of the village and the land owner,\" Kohlberg said. He said he would be willing to upgrade the theater to the new digital format as well.

There is still a chance that that theater could survive, though it is not likely. The drive-in could fit into the other two proposed plans. They also call for a large commercial area but allow for smaller businesses within that commercial area.

The village will decide which of the three proposed plans the land owner should use after a public hearing. The public is invited to voice their opinion Monday April 13th. If they cannot make the meeting, they are urged to share their thoughts on what should be done with the land by visiting www.pleasantprairieonline.com and visiting the online \"Open Village  Hall.\"