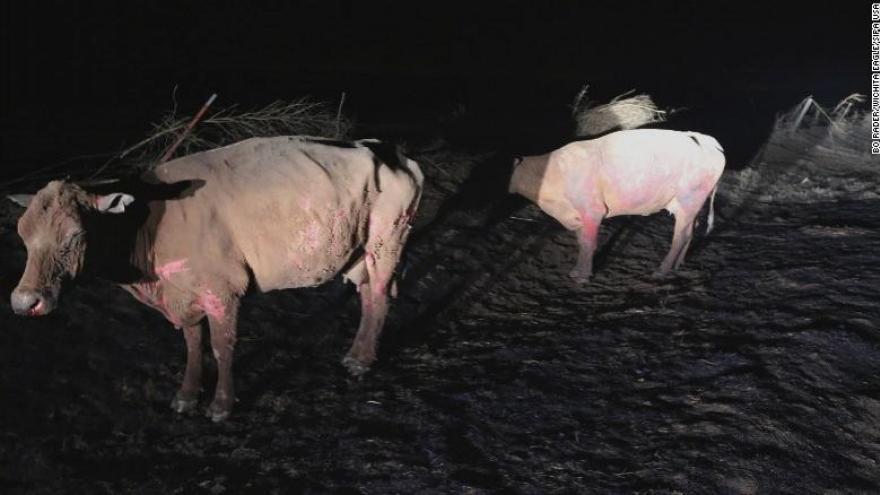 (CNN) — Rancher David Bouziden lost his home, his ranch and nearly all his cattle in wildfires that swept through Kansas this week.

Bouziden barely escaped the blaze, which set a state record for the most widespread single fire. On Monday, he was plowing a fireguard on his ranch in Clark County in Southwest Kansas when flames propelled by near-70 mph winds struck the pasture, he said. The smoke engulfed him, forcing him from his tractor to struggle through soot and ash. He could hardly see, he said, but managed to distinguish the outline of a hay shed where his pickup truck was parked.

Bouziden was able to drive to safety, but nearly all his cows were killed in the fire that consumed his home, three outbuildings, hay barns and machinery sheds.

"It burned every acre of the ranch. There's not a blade of grass standing out there."

Bouziden's family has been in ranching for nearly 100 years, since his grandfather bought a few cattle in the 1930s. "This is all I've ever done," he said.

His experience is typical of ranchers in Kansas this week, where grass fires have scorched more than 650,000 acres, devastating farming and ranching communities.

The destruction has been particularly pronounced in Clark County.

Randall Spare, a veterinarian in Ashland, the county seat, said Wednesday it's too early to make a guess as to how many cattle were lost in the blazes; ranchers are still trying to assess the damage.

With spring approaching, many of the cows were calving, Bouziden said, and if the calves are added to the count, the number of animals lost could nearly double.

The fires have been perpetuated by low humidity and heavy winds, conditions that have made the Kansas Plains a tinderbox. The state saw a particularly wet summer last year, said Todd Domer, spokesman for the Kansas Livestock Association. According to Domer, the grass that it brought is now fueling the fires.

"We had the perfect storm," he said. "We had a wet summer and then kind of a dry winter and then you get wind on top of that and then anything that's flammable will spark."

Domer spoke about the emotional toll an event like this takes on ranchers.

"They're geared to take care of cattle and have cattle be healthy and grow and be productive," Domer said. "When you have to switch gears mentally and deal with injuries and death on a massive scale, it can be pretty tough."

The devastation for ranchers' businesses is far reaching. Not only have they lost an unknown number of cattle, but the livestock that have survived have no grass or hay to feed on, most of it having been consumed by the flames.

"It looks like the moonscape," Domer said. "It just looks like a big sand beach that's endless."

The fences that lined the edges of the pastures, they're gone, too. "That's a rancher's infrastructure right there," Domer said. "That's a huge loss."

He said early estimates have the cost of fencing at $10,000 per mile.

He's been focused on helping his veterinary clients assess the damage. When asked they dealing with the losses, Spare said, "They care so deeply for their livestock. They're more concerned with their livestock's welfare than their own."

Bouziden, who, like many of his neighbors, is focused on dragging the dead cattle into a pile to get a physical count.

"It's entirely devastating," Bouziden said. "You've got a home there with all of your belongings and 40 years of living, and it's gone."

But the generosity and support of his community and groups like the livestock association, which is heading up relief efforts, is helping him through.

"It's really heartwarming to see how your neighbors react in a disaster like this," he said. "It's that way all over the country. People want to help."