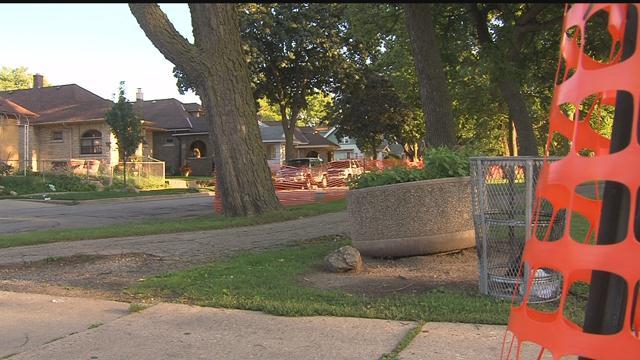 For second time in a week, the battle over an orange fence at Sherman Park goes to court.

"It does look disgusting," said Bill Neddle. "Take it down."

It's all the talk over coffee at the Sherman Perk, a place for Sherman Park residents like Neddle, to share how to move forward after some tense weeks in their neighborhood.

"Just it being there, it's a reminder of something that happened that was ugly," said Bill Neddle. "Its over."

"Putting the orange fence up is like a hazard, a caution," said Sherman Park resident Terrance Johnson. "It's saying, stay away. It's a bad area."

A judge on Wednesday agreed, thus keeping a restraining order in place on the fence.

It had been in place until Sunday, when County Executive Chris Abele ordered it to be taken down. But that only ignited a legal battle between Abele and Sheriff David Clarke about who's in charge.

"A county executive sued a county sheriff over whether or not an orange fence should be around a park over a weekend," said Michael A.I. Whitcomb, Clarke's attorney. "I mean, that's not a major national issue."

Clarke's attorney said it was the sheriff's intention to take the fencing down the week after Labor Day, but the judge asked why the sheriff didn't share those plans.

"The county exec has done everything to reach out to move to consensus, to respect the position of the sheriff, to work collaboratively, and hasn't had anything reciprocated," said Mark Cameli, Abele's attorney.

Residents said  the political games need to stop because the focus is being lost on what's most important, which is restoring the feeling of family.

"I think the hope and the optimism for the future lies more in our actions as opposed to a fence," Johnson said.

Neither Clarke nor Abele attended the proceedings, but both sides will be back in court again on September 29th.