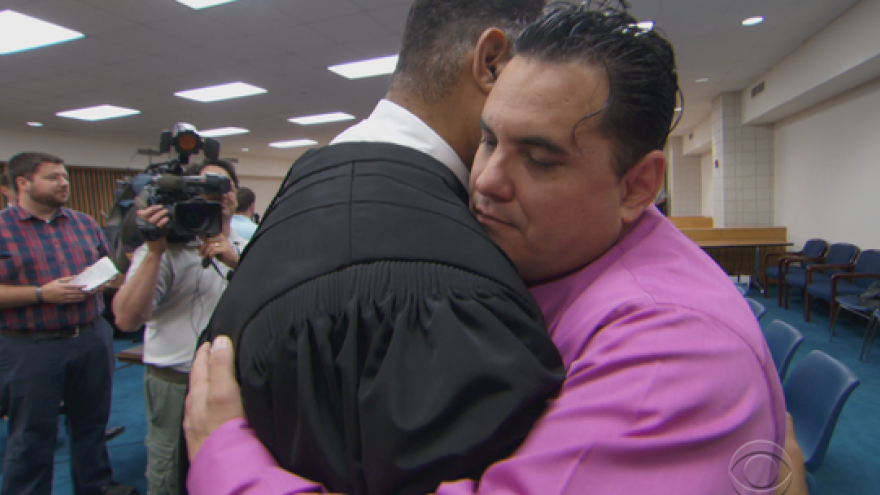 FAYETTEVILLE, N.C. -- (CBS NEWS) Inside the county courthouse in Fayetteville, Judge Lou Olivera made headlines with an unusual decision.

A few years ago, Joe Serna was arrested for drunk driving. As part of his probation, he wasn't allowed to drink. So when he lied about a recent urine test, the judge felt he had no choice.

"I gave Joe a night in jail because he had to be held accountable," he said.

It was just one night -- but as he entered the cell, Serna said he knew it would be one of the longest nights of his life.

"When I walked into the jail cell, and they closed the door behind me, I started feeling this anxiety," Serna said. "It came back -- a flashback."

Retired Army Sargent First Class Joe Serna did three tours in Afghanistan and has two purple hearts to show for it. The Green Beret survived an IED and a suicide bomber. But he said his scariest moment was the night he was riding in a truck with three other soldiers.

"We were following the creek and the road gave way. And the vehicle went into the creek." Truck started filling with water.

Trapped and unable to move, Serna felt the water rising. Past his legs, then waist, and neck until finally it stopped -- at his chin.

Serna was the only one to leave the truck alive. He said it still haunts him. "I suffer from PTSD."

Among his issues -- a fear of being in small, cramped places.

And so a few minutes after Serna was locked up, Olivera surprised the man he sent to jail by joining him for the entire night. "We ate meatloaf and we talked about a lot of things."

"We talked about our families," Serna said. "The walls didn't exist anymore. He brought me back to North Carolina from being in a truck in Afghanistan."

This week, Serna promised the judge no more mess-ups. "I don't want to let you down, ever," he told Olivera.

It's not how law and order usually works, but sometimes jail is not what a man needs. Sometimes the best sentence is compassion.

To contact On the Road, or to send us a story idea, email us.