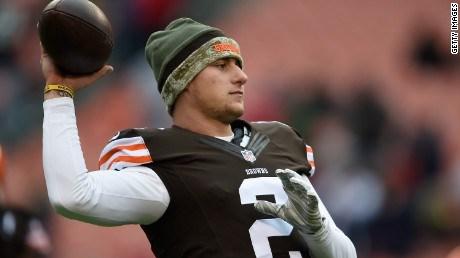 Manziel's former girlfriend, Colleen Crowley, accused the former NFL quarterback of restraining, hitting and threatening her during an alleged assault on January 30. She says in an affidavit that Manziel grabbed her by the hair and hit her, causing her to lose her hearing in one ear.

The indictment accuses Manziel of "intentionally and knowingly and recklessly (causing) bodily injury to" Crowley.

The NFL also is investigating the incident. Manziel could face a league-imposed suspension if he is found to have violated the personal conduct policy.

Jim Darnell, an attorney for Manziel, said his client respected the grand jury's decision but said the panel heard only what the district attorney presented in a closed hearing.

"Johnny will certainly plead 'not guilty' and we believe the evidence will support that plea. Out of respect for Ms. Crowley, we will not try the case in the press. We do, however, believe that Johnny will be acquitted at the conclusion of the case," he said in a statement.

"Scared for my life"

In the affidavit, Crowley says she was with Manziel at an upscale hotel in Dallas early on the morning of January 30. She says Manziel threw her on the bed and restrained her, preventing her from leaving the room. Crowley said she was still restrained as Manziel led her to the hotel's valet, where she cried: "Please don't let him take me. I'm scared for my life."

The valet didn't know what to do and allowed the pair to leave, according to the affidavit.

Crowley and Manziel then drove to Crowley's car. They both got in -- against her will, Crowley says -- but she jumped out and hid behind bushes. "He grabbed me by my hair and threw me back into the car and got back in himself. He hit me with his open hand on my left ear for jumping out of the car. I realized immediately that I could not hear out of that ear, and I still cannot today, two days later," the affidavit reads.

Crowley says she hit Manziel several times while still afraid for her life.

They then left Dallas for her apartment in Fort Worth. During the ride, Manziel allegedly threatened to kill both himself and her.

The fight continued at the apartment, where Manziel allegedly smashed Crowley's phone, and she pulled a knife out of her knife block and advanced toward him, according to the affidavit. He fled.

From early promise to a downward spiral

Manziel entered the national spotlight as a redshirt freshman at Texas A&M, leading the Aggies to a 29-24 upset win against No. 1 Alabama in November 2012. The next month, he made history as the first freshman to win the Heisman Trophy, college football's most prestigious award.

The Browns traded up to select Manziel 22nd overall in the 2014 NFL draft. While he showed flashes of promise, he ultimately couldn't retain the starting quarterback job.

Last season, Manziel appeared in nine games for the Browns, starting six. He threw for 1,500 yards and seven touchdowns and five interceptions. He rushed for 230 yards.

Manziel was cut by the Browns on March 11, two days after the start of the 2016 NFL calendar year. He had been signed with the team through 2017 before he was released.

This criminal charge is the latest in a string of events that leave Manziel's NFL career in doubt.

In February 2015, Brad Beckworth, a friend and adviser to Manziel and his family, said in a statement that the quarterback had entered a treatment facility the previous month. Manziel was at Caron, an alcohol and drug treatment facility in Pennsylvania.

"I owe private apologies to a lot of people that I disappointed but a very public one to the Browns organization and the fans that I let down," Manziel said in a statement April 17, 2015, after leaving rehab. "I take full responsibility for my actions and it's my intention to work very hard to regain everyone's trust and respect."

But that started to unravel.

On October 12, dashcam video showed a police officer pulling up to Manziel and Crowley, who were parked on the side of the road, telling them of "numerous calls" about their speeding BMW. Crowley told police that Manziel hit her several times to prevent her from leaving the car. However, she downplayed the incident. "I don't want to make a big deal," she told an officer. No charges were filed.

On January 2, according to CNN affiliate WOIO-TV, North Olmsted, Ohio, police cited Manziel for driving with expired license plates. They had expired on September 20. Manziel was driving the same car when police questioned him on the side of the road in October, the TV station said.

Manziel missed the Browns game against the Pittsburgh Steelers on January 3. According to an ESPN report, he was in Las Vegas that weekend in disguise and identified himself as "Billy."

"Behavior will not be tolerated"

Ahead of the start of the 2016 league year, before Manziel was released, new Browns head coach Hue Jackson said Manziel's future as a member of the Browns would be addressed soon.

"I think it's really important that obviously there (were) some people involved in this situation that happened, and I feel very bad about those things, as they do happen," Jackson had said on February 24 at the NFL Combine in Indianapolis. "But I want to make sure we all understand that that behavior will not be tolerated as we move forward. And that's all I want to say about it. I want to leave it at that. Our organization is going to take a stand, and we're going to move on from those kind of situations as we move forward."

And for the second time in a little more than two months, an agent fired Manziel as a client. Prominent agent Drew Rosenhaus said in a statement on April 13 that he has "terminated the standard representation with Johnny Manziel in the hopes of helping him get the treatment I believe he needs."