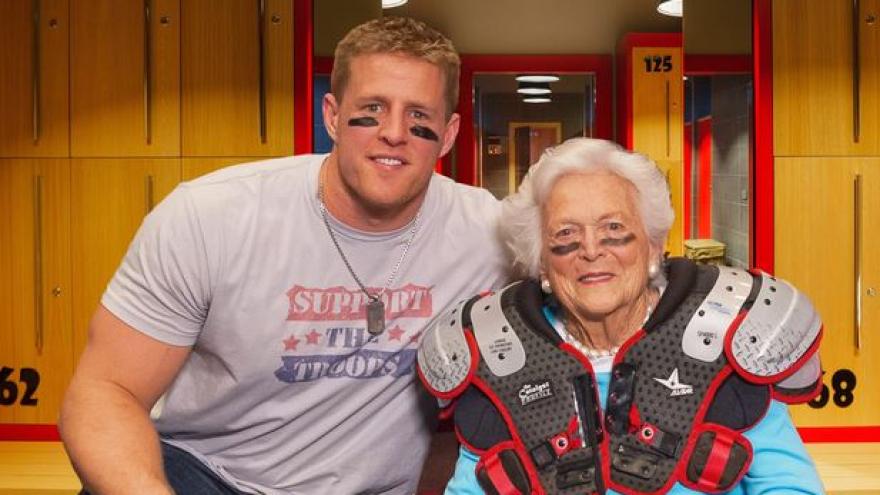 The NFL star wrote a message for the former first lady on Twitter, after she died at the age of 92 on Tuesday night.

Rest In Peace Mrs. Barbara Bush.
You were a beautiful light in this world and I am forever thankful for your friendship. pic.twitter.com/yuZvQ7o8aH

"Rest In Peace Mrs. Barbara Bush. You were a beautiful light in this world and I am forever thankful for your friendship," Watt wrote, accompanying a photo collage of him and Mrs. Bush. Over the years, the two have met up countless times and formed a friendship — despite their 63-year age difference.

Watt, who has played for the Houston Texans since 2011, often helped Mrs. Bush with her charity, the Barbara Bush Houston Literacy foundation. Raising awareness for literacy in the United States became her mission as first lady. She continued to fight for the cause after leaving the White House.

In December 2014, Watt joined Barbara Bush at the Hobby Center for Performing Arts in Houston, where the two read children Christmas books together. They read "'Twas The Night Before Christmas" before Houston's production of The Radio City Christmas Spectacular.

In 2016, they teamed up for the same cause, filming a PSA about the importance of reading. In the PSA, Watt joins Mrs. Bush at home to go over their "playbook" and form a strategy to raise awareness about low literacy in Houston.

That same year, Mrs. Bush threw out the ceremonial first pitch at the JJ Watt Charity Classic, a fundraising softball game held in Houston. Watt escorted the former first lady onto the field and acted as her catcher. He gave her a big, supportive hug after the pitch.

Watt often does charitable work for the city, including aiding Hurricane Harvey relief.

Their common interest in philanthropy helped bond this unlikely pair, and the football star says he is grateful for the former first lady's friendship.