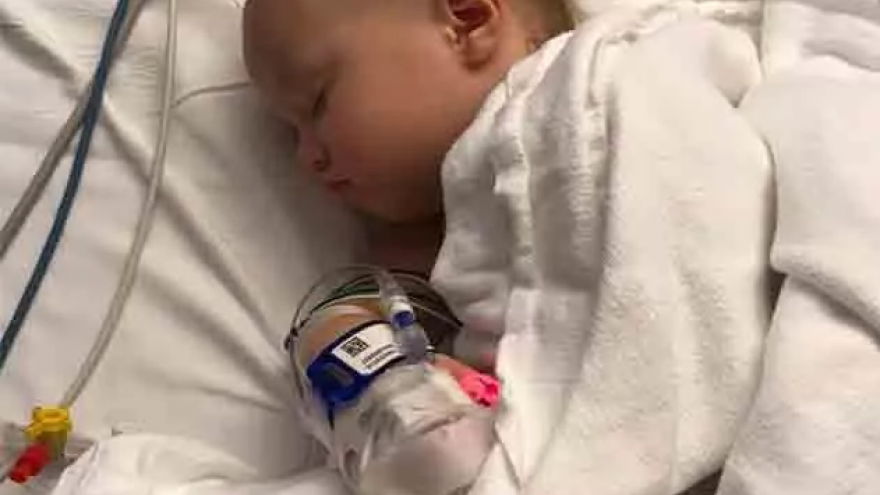 ST. LOUIS COUNTY, MO - (KMOV/CNN) It's a small festive reminder of the approaching holiday season, but for a West County toddler, it became a dangerous hazard.

Fourteen-month-old Andi Jackson was playing with a jingle bell when her left index finger became lodged inside a tiny hole.

Andi's mom, Lisa Jackson, never expected the stuck bell would turn into a serious health hazard, she admitted she even laughed when it first happened.

Jackson says she tried using baby oil to slide the bell off her daughter's finger, but the bell wouldn't budge. After noticing blood, Lisa and Sean Jackson drove their daughter to a local emergency room.

The Jackson's say the ER doctor remarked "I haven't seen anything like this" and recommended they take Andi to St. Louis Children's Hospital.

After arriving at the second emergency room doctors evaluated Andi, then decided to take her to the operating room.

Her parents became more concerned when doctors said, "we can't say her finger will be saved, we can't guarantee it."

The Jackson's say doctors discussed using a "diamond saw" to remove the bell, but there was concern about creating additional injury.

Lisa Jackson says a doctor was eventually able to remove the "jingle bell" with a device that resembled needle nose pliers.

Andi's parents hope their story will alert other parents about potential hazards most people would never suspect.