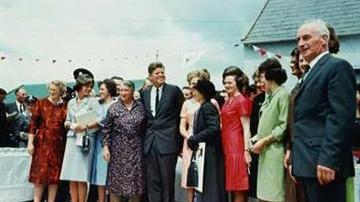 MILWAUKEE-In the host city of Irish Fest and one of the most popular parades of the year on St. Patrick's day, Wisconsin Irish Americans are taking a keen interest in a new report about JFK's dream to return to Ireland.

In 1963, President Kennedy visited his ancestral homestead in County Wexford.

It was just five months before his murder in Texas.

The Herald in Ireland quotes relatives who say Kennedy was embarrassed by the disruption the visit caused with all the media and security.

Patrick Grennan now runs the farm  of his grandmother who was JFK's second cousin.

\"He actually asked my grandmother could he come back the next year with his wife and the kids on a private visit, without the media intrusion. Of course, that didn't happen.\"

The Kennedy family traveled back to Ireland this past June to commemorate his historic visit to the Emerald Isle.

Although a book on the life of Kennedy was entitled \"Johnny We Hardly Knew Ye\" recalling the old Irish ballad, in recent years, Sean Nos singers (or those who practice the old Celtic style of singing) have adapted the \"Summer of His Years\" which was written in the immediate aftermath of the tragedy.