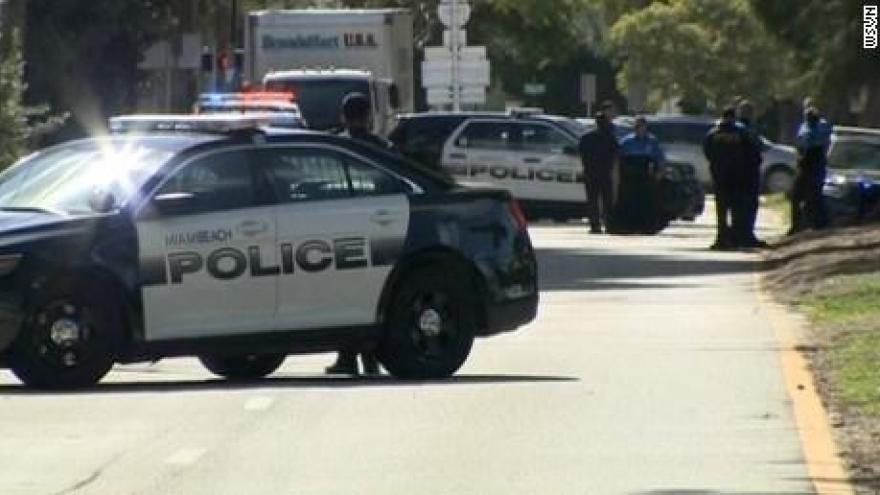 (CNN)  Some of the voices making the bomb threats were muffled and distorted. Others were automated.

"There is a bomb in one of the children's backpacks and it's going to detonate shortly," one said.

Some callers made anti-Semitic statements.

"The Jews will be decimated," a voice warned.

JTA News, a Jewish news service, posted audio of one of the bomb threats. In it, a disguised voice warns that a C-4 bomb has been placed in the JCC and that "a large number of Jews are going to be slaughtered.

The calls targeting Jewish community centers and school in nearly 33 US states and two provinces in Canada have sparked alarm and panic. President Donald Trump has denounced them. The FBI and the Justice Department's Civil Rights Division are investigating possible civil rights violations.

There have been no reports that authorities found devices at any of sites.

Conversations with Jewish community centers and leaders in more than a dozen states and in Canada offer a glimpse into the calls.

The sex of the callers varied. The details in the calls were vague, indicating some callers didn't know about the targeted locations, according to officials at some centers.

People at several Jewish community centers were trained to deal with the calls. One receptionist tried to keep a caller talking, following printed guidelines next to the phone. The questioning agitated some callers.

Here is a sampling of information leaders at Jewish community centers gave about the phone calls.

An employee of the Merage Jewish Community Center of Orange County said the caller had a "male voice. Very robotic."

"The answers provided were nothing specific. Nothing to tell us they knew anything about our location," the employee said.

In Los Angeles, Brian Greene, executive director of the Westside Jewish Community Center, said the caller's voice was "mechanical" and distorted. It sounded like a woman but it may not have been, he said.

The caller said there was a bomb in the building and they had an hour to get out. The caller was asked the location of the bomb, Greene said.

"The caller said that's not important, just get everyone out of the building," Greene said.

The automated bomb threat that came into the Charles E. Smith Jewish Day School in Rockville, Maryland, said Jewish souls would be destroyed, according to Laurie Ehrlich, the school's director of marketing and communications.

Ehrlich said the front-desk receptionist who answered the call managed to get a callback number, which she gave to police.

The chief marketing officer of another Jewish community center in Maryland said the caller on January 9 sounded like an older woman but it could have been automated. The person at the center tried to engage the caller but they didn't respond and hung up.

The person who called in a bomb threat on Monday to the Hebrew Day School of Ann Arbor in Ann Arbor, Michigan, sounded like a man who had disguised his voice, said David Shtulman, executive director of the Jewish Federation of Greater Ann Arbor.

"There is a bomb in one of the children's backpacks and it's going to detonate shortly," is what the caller said, according to Shtulman, who spoke to police and the person who took the call.

There were no demands issued and there was no conversation with the caller, Shtulman said. "This person was off the phone pretty quickly."

The school also received a threatening call in May 2016.

"That was much more frightening because it hadn't happened anywhere else," Shtulman said.

The caller then said his brother had put a bomb in a backpack. He hung up initially but stayed on the line when the school called him back.

"Why are you arguing with me when you should be getting out!" the caller said, according to Shtulman.

There was a bomb in the lobby, claimed the person who made the call to the Jewish Community Center of Greater Buffalo in Buffalo, New York.

"They evaded any questions we had for them and it was clear to us they didn't know our building specifically," said Rick Zakalik, the center's executive director.

He said the person who answered the phone referred to the guidelines posted next to the phone, and they "responded perfectly."

"This is like duck and cover from nuclear bombs in elementary school that you all experienced," he told them.

Bomb threats are not uncommon, and it's rare for them to be genuine, he said.

"For Jewish institutions, being a target is nothing new," Zakalik said. "We have been a target for thousands of years."

The Mandell Jewish Community Center of Greater Hartford refreshed its training to deal with bomb threats in case the center was targeted, said David Jacobs, the center's executive director. The center, in West Hartford, Connecticut, received it's one and only bomb threat the day after training, he said.

The caller's voice was hard to make out, said Todd Rockoff, chief executive officer of the Tucson Jewish Community Center. Based on what he knows it "probably sounded more muffled than clear," Rockoff said.

"The person that answered the phone was able to ask some questions that kept the caller on the phone," he said.

The caller threatened the Siegel Jewish Community Center with a bomb, said Executive Director Ivy Harlev, who declined to give additional details. His community, in Wilmington, Delaware, refuses to let the threat cripple them, Harlev said.

"I can tell you that my community has been incredibly strong in the face of this adversity," he said. "This affects more than just the Jewish community."