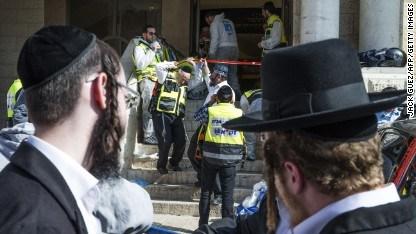 (CNN) -- Books, filled with prayers for peace, splattered with blood. Sacred vestments shredded by bullets and knives. Lifeless bodies in the sanctuary.

The rabbis had gathered to ask God to bestow blessings upon their troubled land. Their prayers were interrupted by two men wielding butcher knives and a gun.

An Israeli police officer and four rabbis were killed, including an American whose family is considered \"rabbinic royalty.\"

Combined with the site of the slaughter -- a synagogue in West Jerusalem -- the targeting of rabbis struck at the soul of Jews around the world, several Jewish leaders said Tuesday.

\"This is an attack on all of us,\" said Rabbi Shmuel Herzfeld, who leads Ohev Sholom Synagogue in Washington. \"Any terrorist attack is a horror. But to attack people while they are engaged in prayer, are talking to God, is a new low.\"

In fact, both sides in the seemingly endless fight between Israelis and Palestinians have attacked people at prayer.

In 1994, a Jewish extremist murdered 29 Palestinians worshiping in Hebron. In 2002, Palestinian extremists attacked a Passover Seder in Natanya, killing 30.

Like those assaults, Tuesday's murders threaten to ignite another inferno of unholy violence.

Palestinian Authority President Mahmoud Abbas condemned the attack, but Hamas and other Palestinians praised the terrorists, identified by police as two cousins from East Jerusalem.

Israeli Prime Minister Benjamin Netanyahu's office vowed to \"respond with a heavy hand\" to the killings.

The attackers, identified as Ghassan Abu Jamal and his cousin Udayy Abu Jamal, were killed by police responding to the synagogue assault, authorities said.

Sami Abu Zuhri, a spokesman for Hamas, linked the attack to the discovery Sunday of a Palestinian bus driver hanged in his bus not far from the synagogue where the rabbis were killed.

But relatives of the terrorists told The New York Times the men were motivated by Israel's recent closure of Jerusalem's Temple Mount/Noble Sanctuary compound, a site holy to both Jews and Muslims.

The site has since been reopened, but the dispute has fueled small-scale attacks by Palestinians that have killed six Israelis in recent weeks.

In the United States, the horror of Tuesday's terror attack unified Jews across the political spectrum, even those who sharply disagree with Netanyahu's handling of the Israeli-Palestinian crisis.

In an editorial, the Jewish Daily Forward said the frustration of Palestinians \"living under occupation\" is understandable.

But killing innocent men at prayer is morally indefensible, the newspaper said, noting that the synagogue is in West Jerusalem, not in \"contested territory.\"

Killing innocents anywhere is detestable, Jewish leaders said Tuesday. But there is something especially heinous about killing people while they pray.

\"We look on our ministers, priests, rabbis and mullahs as intermediaries between ourselves in the divine world,\" said Peter Machinist, a professor of Hebrew at Harvard University.

Within the slain rabbis' ultra-Orthodox tradition, respected rabbis are assumed to have a \"hot line to heaven.\" \"So an attack on them is a little closer to being an attack on God,\" Machinist said.

The four rabbis killed were: Avraham Shmuel Goldberg, 58; Aryeh Kopinsky, 43; Moshe Twersky, 59; and Calman Levine. Goldberg was a dual British-Israeli citizen, and the other three were U.S.-Israeli citizens.

\"This was an attack by Palestinian terrorists of pure evil and would have been utterly deplorable wherever, whenever it had occurred,\" said Rabbi Jonathan Sacks, the former chief of rabbi of Britain.

\"But for this terrorist attack to occur in a synagogue, deliberately targeting innocent Jews deep in prayer, is something that strikes at the soul of Jewish people around the world.\"

\"We strongly believe that houses of worship should be a sanctuary for all people, not a place of violence as we regretfully witnessed today. Islam commands its followers to protect houses of worship,\" the group said in a statement on Twitter.

Moshe Twersky, originally from Boston, comes from an almost Kennedy-like clan of respected scholars and rabbis. His father, Rabbi Isadore Twersky, was a world-renowned expert on Jewish theology and founding director of Harvard's Center for Jewish learning.

Twersky's maternal grandfather was Rabbi Joseph Soloveitchik, a philosopher and professor at Yeshiva University who was considered one of the most important minds in Modern Orthodox Judaism.

\"It's a very prominent family in Jewish life, in Jewish scholarship, in Jewish theology,\" Machinist said.

Herzfeld said Soloveitchik was responsible for training thousands of rabbis who passed through Yeshiva University in New York, where his legacy still burns bright. Twersky's brother, Mayer, teaches at the university.

Family legacy aside, what makes Tuesday's attack all the more galling, Jewish leaders said, is that the rabbis planned to engage in the very opposite of terrorism: praying for peace.

\"That's what's so horrible about this,\" said Herzfeld. \"These people were trying to do their part to bring good into this world through their dedication to God.\"

Other Jewish leaders noted that the rabbis likely did not expect their morning service to be interrupted by an assault.

\"If you are truly at prayer, you are most vulnerable,\" said Jane Eisner, the Forward's editor-in-chief.

Worshipers are not looking around for potential terrorists; they are focused on God. During the central prayer of Jewish services, the Amidah, it is considered sacrilegious to interrupt worshipers.

\"Amidah\" means \"standing\" in Hebrew, and Jews are taught to imagine themselves standing before God, asking for his blessing, said Herzfeld.

By tradition, the last prayer asks for peace in Israel. It's unclear whether the rabbis had reached that point when the slaughter began.