Jeopardy! Champ Ken Jennings has nothing but respect for West Allis challenger 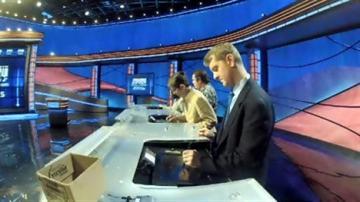 The two will face each other in the \"Battle of the Decades\" Thursday, April 3rd on CBS 58 Milwaukee at 6 p.m.

\"I'm a pretty solid Jeopardy! player,\" Jennings told CBS 58's Michele McCormack before the taping of the show. \"But Michael's very good. I can tell the guys who've got it just by watching on TV and Michael's got it.\"

The \"Battle of the Decades\" brings back prior champs from the previous decades starting in the 80's.

Jennings under a new rule made the most consecutive appearances  at 74 and won more $2 million.

Top finishers from each decade will later compete for  $1 million.

Jennings is not taking anything for granted.

\"You have to know a wide range of knowledge. You have to be able to keep your wits about you when you're not on your couch at home but when you're here (in studio). You have to  fast on the old button. It's a whole thing.\"