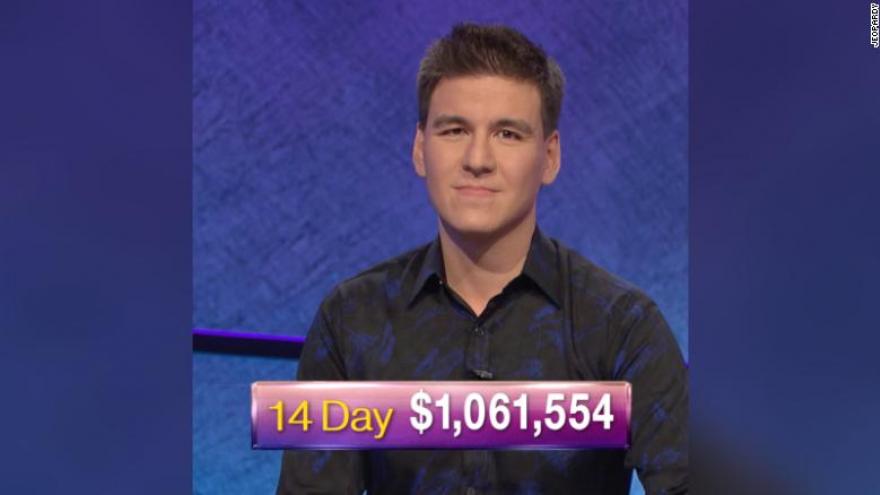 He didn't break a record but still took home a large sum of money.

(CBS News) -- "Jeopardy!" contestant James Holzhauer is the type of outlier game-show producers both yearn for and dread. A show's budget can take a hit from big winners such as Holzhauer and earlier "Jeopardy!" champion Ken Jennings, yet these players can pay off for shows in the long run by providing a singular boost to ratings and buzz.

Game shows are "tightly budgeted" programs that base their business models on game mechanics, said Fran Shea, executive vice president of programming and marketing for the Game Show Network. With Holzhauer, the show's "probability has probably been broken."

Holzhauer topped $1 million on Tuesday in just 14 games, becoming only the second person in history to top $1 million. In 2004, Jennings took 33 games to reach $1 million. "Maybe the financial people are scrambling, but you'll get a bump from everybody talking about 'Jeopardy!'," Shea said.

Even early on in his winning streak, Holzhauer boosted the show's audience. Ratings for "Jeopardy!" rose 5 percent in the week ended April 14, pushing it to the top of household ratings for syndicated programs, according to trade publication Broadcasting & Cable.

To put Holzhauer's winnings in perspective, the average champion takes away $19,980, according to "Jeopardy!" fan site TheJeopardyFan.com, which analyzed winnings from October 2004 through May 2017. But once the second- and third-place contestants' winnings are calculated, the average for all "Jeopardy!" contestants is about $11,900.

Holzhauer, by contrast, is averaging $75,000 per victory, according to the James Holzhauer tracker. Even Jennings, who became a household name for his 74-night winning streak, averaged only $34,000 per victory, show host Alex Trebek said earlier this week.

Jennings humorously took aim at Holzhauer's impact on the budget for "Jeopardy!" on Monday. He tweeted: "I don't feel I get enough credit for making small, sensible Jeopardy wagers, which helped the show with its prize budget."

Long-running game shows like "Jeopardy!" typically base their budget on what has been won in past years, former Game Show Network programming chief Bob Boden told The Atlantic. Shows that can be affected by outliers like Holzhauer sometimes take out insurance policies to protect against unexpected losses, he added.

Holzhauer not only knows his trivia, but he's employing an aggressive betting strategy that's lifting his jackpots beyond the norm. A professional sports gambler, Holzhauer goes after the higher-value clues early in the game, rather than picking off the lower-reward clues first.

"It's absolutely insane what he's doing," Jennings told Wired magazine. "Statistically, he's playing at as high a level as anyone who's ever played the game. And then he's got these incredibly confident wagers." Jennings, who'll star in a new game show on the Game Show Network this June called "Best Ever Trivia Show," added that he "would never have had the stomach for those kinds of bets."

He noted: "You're going to have to be comfortable with losing the average American income on a single trivia question a lot of the time, and then have to come back five minutes later and play another game with that in the back of your mind."