Janitors rally on eve of negotiations 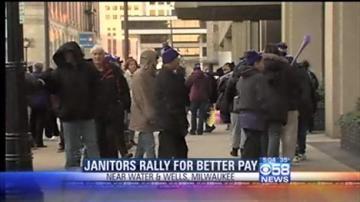 Tomorrow they enter contract negotiation with some of the largest contractors who serve corporations like BMO Harris.

Union officials tells CBS 58 that CleanPower janitors at BMO Harris are only offered part time hours and make an average of $9,000 a year with no health benefits.

Many are forced to tap into government programs, like food stamps, to make ends meet.

BMO Harris is not involved in the negotiations. So, it said it would have no comment on the demonstration.

Union officials also said that the salary for a full time janitor in Milwaukee is $23,000 a year and they do have access to affordable health care.

They are fighting to maintain that and not rely on tax payer funded programs as they begin contract negotiations.