Janay Rice: Ray Rice was 'terrified' after hitting me 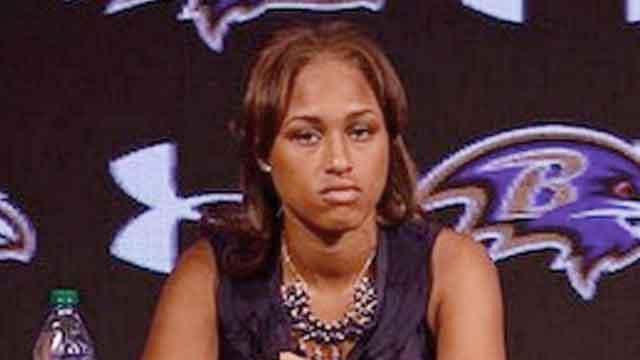 (CNN) -- Ray Rice is a human who made a mistake that he'd never made before and that he won't make again, wife Janay Rice said in an interview that aired Monday.

\"Ray knows me, and there's no way. He knows what he would have to deal with. ... I'm not going to sit there in silence and let something happen to me. And God forbid, in front of my child, just let it happen? There's no way.\"

It was Janay Rice's second interview since her husband, a former running back for the Baltimore Ravens, viciously knocked her out in a casino elevator in Atlantic City, New Jersey, after a night of heavy drinking.

Images from inside the elevator would change the pair's lives, as Ray Rice was indefinitely suspended by the NFL, and Janay Rice became a poster child for domestic violence.

The most shocking clip shows the 200-pound football player punching his then-fiancee, sending her head into the wall before she collapses unconscious to the floor. Surveillance video shows Ray Rice drag her partially out of the elevator and callously dump her limp body face-first on the ground.

\"He said he was just terrified,\" Janay Rice told the \"Today\" show in an interview that aired Monday. \"He was in such shock that this just happened, he didn't know how to function.\"

Sitting next to her mother, Candy Palmer, and occasionally fending off sniffles and dabbing her eyes with a tissue, Janay Rice said she was angry and hurt by her husband's violence, but it also hurt to see his career pulled out from under him, to lose the \"support system\" that the Ravens provided and to be forced to \"pick up and move.\"

She attributed Ray Rice's actions that February night, which ended with both of them initially charged with simple assault, on \"humanness.\"

\"Everybody makes mistakes. After this whole situation, you would think that we lived in a country full of people who never made a mistake,\" she said.

In a news conference arranged by the team three months after the incident, Ray Rice apologized for the situation and to the Ravens and the team's fans. Janay Rice then issued a controversial apology herself, saying, \"I do deeply regret the role that I played in the incident.\"

The Ravens tweeted her words and then deleted them after a firestorm of criticism from those who questioned why Janay Rice would need to apologize after taking a left cross from a pro football player who benches 400 pounds.

Rice told \"Today\" she agreed to the press conference -- and to the Ravens' suggestion that she apologize -- because she thought it would help the situation.

She dubbed the press conference \"awkward\" but defended her decision to apologize: \"I didn't think it was completely wrong for me to apologize because at the end of the day, I got arrested, too.\"

As for the perception that her husband was not conciliatory, Janay Rice refuted the notion, saying he apologized to her \"countless\" times.

\"I wouldn't be sitting there next to him if I wasn't the first person to get an apology,\" she said.

The Ravens initially defended their player and promised he'd be back. A prosecutor would later drop the charges against Janay Rice and upgrade Ray Rice's charges to aggravated assault. A grand jury indicted him in March. Ray and Janay Rice wed the next day.

In July, after a disciplinary hearing, the NFL announced it would suspend Ray Rice for two games, a decision widely panned as wide receiver Josh Gordon was kept off the field significantly longer after failing a drug test for marijuana. Yet the league stuck by its decision until another surveillance video -- the one that captured the punch -- surfaced September 8.

By the end of the day, the Ravens had released Rice and the NFL made his suspension indefinite.

'I was sick to watch it'

Janay Rice never saw the second tape, saying she was \"not going to let the public bring me back there.\" Her mother saw it, however, and said, \"I was sick to watch it.\"

Still, Janay Rice, who has been critical of the media's coverage of her and her husband, said the hardest part about remaining silent throughout the ordeal was seeing her life play out in the media.

\"That's been the hardest part, is having so much of your life made public and have it all be negative. That's the hardest part, is not having control over anything that has to do with you. It's a natural thing for a human to want to come out and say, 'No, no. That's not me,' or 'No, that's not true.' But it's like a battle that we just can't win,\" she said.

Monday's \"Today\" interview was the second time Janay Rice has addressed the ordeal, speaking first to ESPN, which granted her control over the final draft and release date of its story. During the interview, she discussed that night in Atlantic City, the aftermath, how she and Ray Rice met as teens and her disappointment in the Ravens for summarily dismissing him after years of loyalty.

Last week, an arbitrator found that the NFL abused its discretion by indefinitely suspending Rice when it had originally sat him down for only two games.

The decision cleared Rice to play again, and ESPN reports numerous teams are interested in the Rutgers University standout. Janay Rice concedes that if he is signed, it will be because a team was able to see past the jarring image of domestic violence that has come to define him.

\"For them to look past this situation, which I know is going to be hard, but at the end of the day, he's a football player,\" she said. \"He's proven himself as a football player for seven years. There's never been a question of what he can do on the field.\"

While it remains to be seen, in this era of heightened concern over athletes and domestic violence, when Ray Rice might next take the field, it's abundantly clear that he will never lay another hand on Janay Rice, she and her mother said.

The show will air the second part of its interview with Janay Rice on Tuesday, including a portion of the interview in which her husband participated.