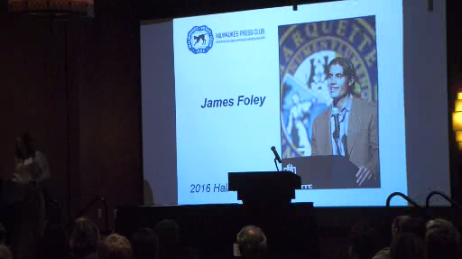 Yesterday evening, The Milwaukee Press Club inducted him into the Wisconsin Media Hall of Fame. Foley was captured by Isis while in Syria back in 2012. He was then killed 2 years later. Part of his HBO Documentary was shown during the ceremony before a moving introduction was given.

A close friend of Foley's accepted the honor on his behalf. "If nothing else, his legacy reminds us that this is important. People need to be telling these stories, otherwise we're not going to know what's taking place around the world," Thomas Durkin said.

Seven others were induted into the Media Hall of Fame last night, as well. This includes long-time Journal Sentinel reporter Don Walker who died last year.