It's Playoff Time for the Bucks, But it's Also Peanut Butter Jelly Time 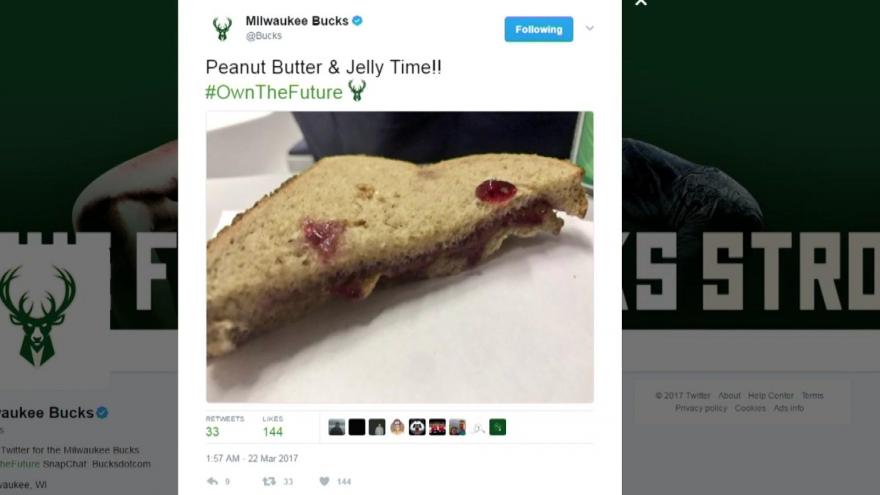 Peanut butter and jelly sandwiches are playing a big role in Milwaukee Bucks players' diets during their run-up to the playoffs. At least, if the Milwaukee Bucks Twitter account is to be believed.

With Coach Jason Kidd addressing the media outside the locker room, inside Bucks big man Thon Maker checks out the spread...of spreads.

On a counter to the side of the room an arrangement of nut butters and jams are open alongside the breads.

\"Today's a little bit of a light day. Usually they would have different sorts of peanut butter and jellies,\" Maker said.

\"Actually before I got into the NBA I used to eat 'em, pregame and stuff. You know, it is a thing because - pregame - you must have a peanut butter and jelly sandwich. It's not too heavy. It's not super light. For guys like myself, we're trying to maintain a certain weight,\" Maker said.

\"Nah, I don't think its overblown man,\" Bucks shooting guard Rashad Vaughn said. He sits next to Maker (whose locker is right next to the PB&J supplies. He takes a tone equal parts sarcasm and seriousness.

\"Everybody here loves peanut butter and jelly sandwiches. They're so amazing. I think everybody eats at least two a game,\" Vaughn said.

But a string of almost-abstract-like tweets have brought interest about the Peanut Butter and Jelly situation...at least from the fan perspective.

On March 22 the bucks tweeted \"Peanut butter & jelly time\" with their hashtag and a picture of a sad looking PB&J.

On March 23 the bucks tweeted nearly the same things with an image of a PB&J from above.

Twitter user @patmula50 replied \"Who tf bites a sandwich from the bottom\" and punctuated his remark with at frowny face emojii.

Also, the online rumor was that rookie Bucks player Thon Maker had to make all the sandwiches for the the team while traveling. He said that's an urban legend.

\"That's how we feel about peanut butter and jelly,\" Vaughn said with a shrug.