"It says no one's immune:" Map shows use of Narcan, overdose deaths in West Allis 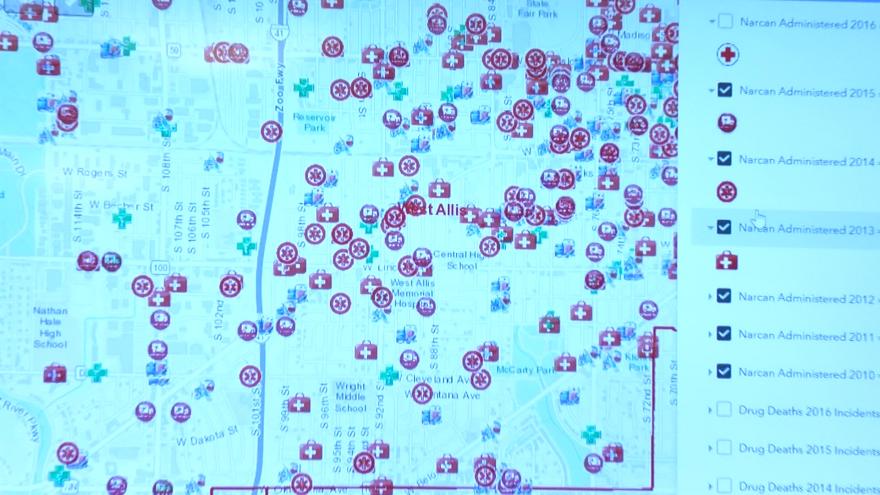 WEST ALLIS, Wis. (CBS 58) -- The West Allis Fire Department encounters hundreds of opioid overdoses each year. The reality of the epidemic is staggering to them and they wanted to share that with the community. They've done it by mapping out each time a dose of Narcan is given.

"I could tell you a bunch of stories about things we've seen in the community that would break your heart and it's all because of heroin," said Asst. Chief Kurt Zellmann with the West Allis Fire Department.

"One of the captains had requested to find out where have we been administering this Narcan use for several years." Pat Walker is in charge of mapping for the city of West Allis. He started pinpointing Narcan administration and overdose deaths over the years.

"We saw a huge spike in the administration of Narcan, and it was an issue for us because of the cost going up so we wanted to make sure we were doing things in the best possible manner and that our medical protocols were correct," Zellmann said.

Instead of finding a trend in one area of town, one look at the map, and they saw the epidemic.

"It says no one's immune. No one can say 'I live in this area' and say 'I'm safe. I don't have to worry about this for my kids, my family members.' Look at the map, it's going to tell you differently," Zellmann said.

That's why they decided to make the map public. The map shows Narcan administered by West Allis Fire Department and overdose deaths in all of Milwaukee County.

"It starts with 2016 Narcan doses and also the 2016 deaths from the county but you can expand the legend and add in other years of administration and deaths to see the total extent of the epidemic," said Pat Walker, City of West Allis map supervisor.

"This is part of the step of making difference and showing that you can't bury your head in the sand -- that we have to do something and go forward with some sort of treatment and action in the community," said Zellmann.

If you'd like to view the map and learn more, the following resources are available: