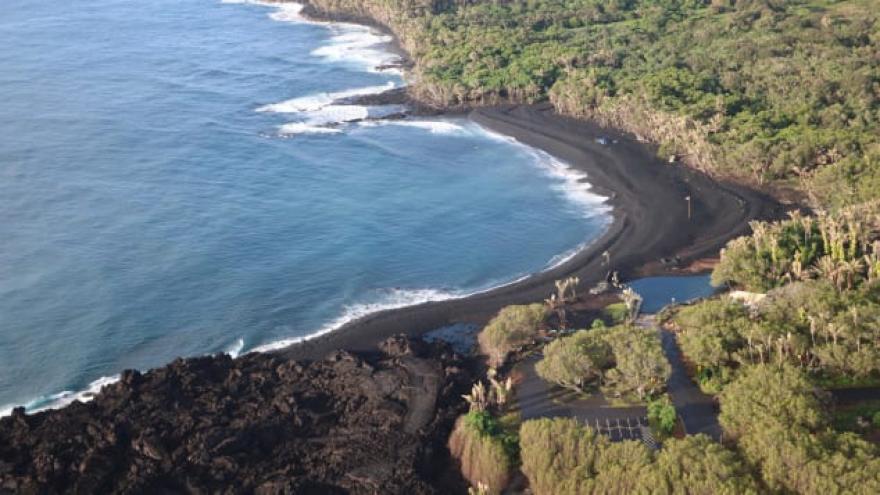 (CNN) — When the Kilauea Volcano erupted in May 2018, it devastated a large part of Hawaii's largest island, which is known as the island of Hawaii.

Houses were destroyed. Businesses were left shattered. Millions of dollars of tourism money — approximately $480 million — was lost as a result of the destructive eruption.

The island of Hawaii has officially bounced back, however, with new openings and resuscitated businesses across the island. It even made it onto CNN Travel's 19 Places to visit in 2019 list.

And now, there's more to celebrate with the creation of a new black sand beach at Isaac Kepoʻokalani Hale Beach Park, thanks to Kilauea.

Although there are other black sand beaches on the island, the Hawaii Visitors Bureau's Ross Birch says he's hopeful about what he calls a "silver lining."

"We hope our community and visitors can make new memories with loved ones at this special place, and always remember the island of Hawaii's unique ability to be ever-evolving," says Birch, the bureau's executive director.

While visitors are allowed to visit the new black beach, they are instructed to use caution. A lifeguard is on duty, but swimming isn't advised due to strong currents and a dangerous shore break, according to the county of Hawaii's Department of Parks and Recreation.

There's also no drinking water available within the park because of lava damage in the area's water lines. If you do go, you'll want to bring plenty of hydration during Isaac Hale's opening hours from 9 a.m. to 6 p.m. The park does officially close at 6 p.m. for now, and camping isn't permitted.

Although four natural ocean thermal ponds were created in addition to the black, lava rock sand, they aren't yet ready for waders as they haven't been disinfected.

For now, visitors would do well to bask in the beauty of the new black sand, taking some consolation in Kilauea not being all bad. Of course, pictures and Instagram posting of Pohoiki Beach are fully allowed.