Investigators looking for cause of Madison apartment fire 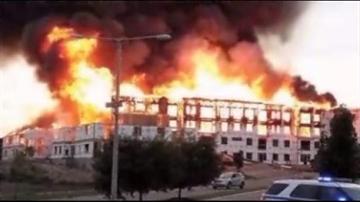 MADISON -- Investigators are picking over what's left of a Madison apartment building trying to figure out how a huge fire broke there last Friday night.

Roger brooks stood outside his apartment Friday night, taking pictures and watching as fire took what was supposed to be the newest piece of the neighborhood.

\"Totally, totally engulfed in flames and it was just a sickening sickening feeling after watching this building go up for weeks and months.\" Brooks said.

Neighbors say the building was a shell of a four-story 105 unit apartment building.

They say they heard explosions before the fire spread out of control.

Now, five different agencies are working together to find out what happened.

\"Nothing has been ruled out at this point.\" said Joel Lee from the Bureau of Alcohol, Tobacco, Firearms and Explosives.

He said investigators won't even start to make a guess at what caused the fire, but says there are people working on this that you would not normally see.

\"We have brought in people from all across the united states to come and they are all subject matter experts.\" Lee said.

Neighbors say while they feel lucky no homes were severely damaged, they want to know what caused the flames and smoke to fill the sky last Friday.

Brooks says he's just hoping the fire was an accident.

\"It really seems like there had to be an accelerant that was laid down to cause that.\" Brooks said.

Another neighbor also he saw a flaming door fly door fly dozens of feet into the air at one point.

Authorities are estimated this fire caused between 3 point 5 and five million dollars of damage.