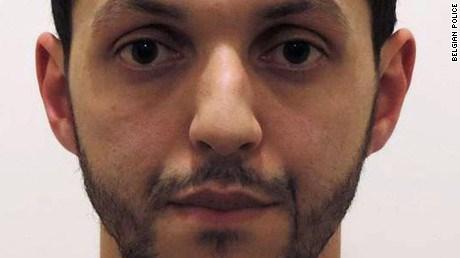 (CNN) Is a terror suspect arrested Friday in Belgium the hat-wearing man seen in airport surveillance video moments before one of two deadly terror attacks in Brussels?

That's what investigators are trying to determine after nabbing Mohamed Abrini in a police operation in the Anderlecht district of Brussels. Abrini has been tied to the terror attacks on Paris last November through surveillance video and DNA. Authorities now can question him about the Brussels airport bombing on March 22, part of the attacks that killed 32 people.

Two bombers died at the airport. A third man wearing a hat is seen on video walking with them. Authorities said he fled.

Investigators also are trying to determine whether a man arrested in a separate operation Friday was part of the second attack -- at a Brussels metro station -- an hour later. Osama Krayem -- also known as Naim al Hamed -- might be the second person "present at the time of the attack at the Maelbeek subway station," Belgian federal prosecutor's spokesman Eric Van der Sypt said.

Authorities have said Khalid El Bakraoui carried out the metro attack and Van der Sypt said that another person was seen with El Bakraoui before the subway blast.

Abrini, a 31-year-old Belgian-Moroccan, had been among Europe's most wanted and was considered "armed and dangerous."

His arrest means that Belgian authorities now have at least two people, along with Salah Abdeslam, who have been directly tied to the attacks in Paris.