Instead of arresting a woman accused of shoplifting, these NYPD cops paid for her groceries 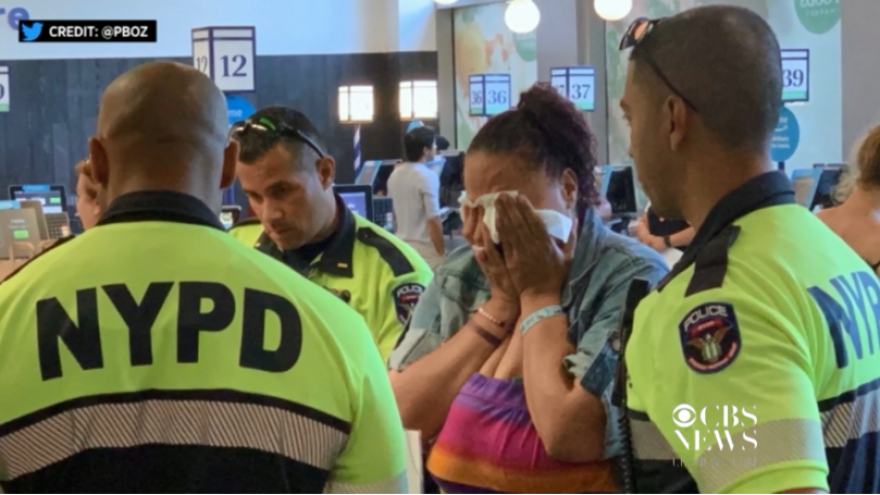 Three New York City police officers were working on the Fourth of July when they decided to stop by a Manhattan Whole Foods supermarket. Security guards told the cops a woman was shoplifting groceries -- and officers are now getting massive praise for their generous response.

The cops -- now identified as Lt. Louis Sojo and Officers Esnaidy Cuevas and Michael Rivera -- were on the way to grab a snack and cold drink in the store when security guards told them a woman was stealing food, Sojo said at a press conference Friday. The cops approached her to assess the situation.

Sojo said the security guard was shocked by the kind response, but brought the officers over to the cashier to pay for the woman's food. "At that moment, she was extremely emotional," said Sojo. "She did thank us, but she was pretty much speechless at what happened."

Film and TV director Paul Bozymowkski, who was in the store during the event, tweeted about the incident Thursday afternoon, "This woman was being held by security. She had food in her bag she didn't pay for. When the NYPD showed up, they paid for her food."

He also posted an image of the officers paying for the alleged shoplifter's food, which appeared to show her getting emotional. The photo has over 2,000 likes and nearly 500 retweets at press time. Bozymowski told CBS News that "it was very moving to see such a genuine act of kindness."

Sojo said the officers did not expect the good deed to receive so much positive attention and that they were "extremely humbled" by the response. He added that it isn't uncommon for officers to pay for someone's food.

"You know, I've been doing this for 22 years. This is not the first time I've paid for food. This is not the first time they've paid for someone's food," he said referring to the two other cops."We don't go out and do it all the time, but, you know, when you look at someone's face and you notice that they need you, and they're actually hungry. It's pretty difficult as a human being to walk away from something like that. We weren't raised like that. So, it's the right thing to do."

In addition to praise from the public, the officers were honored by the NYPD's Chief of Department Terence A. Monahan on Twitter. "Cops like Lt. Sojo and Officers Cuevas and Rivera of the Strategic Response Group are the kind-hearted cops who quietly do good deeds for New Yorkers in need," he wrote on a retweet of Bozymowkski's message.

When asked what the woman had in her bag, Sojo said he saw food he believed was from the ready-to-eat hot food buffet. He said the food cost between $30 and $35.