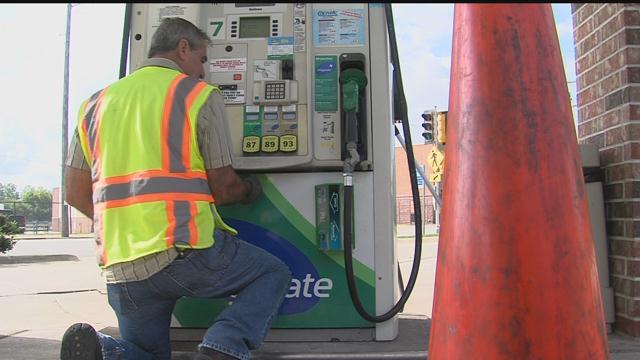 State inspectors are now checking local gas pumps after credit card skimmers were discovered at gas stations across Wisconsin. In our area, skimmers were found in Franklin, Brookfield, and Elm Grove.

CBS 58’s Jessica Tighe joined Weights & Measures Petroleum Inspector, Mike Pappas, in Waukesha on Wednesday as he searched for potential problems. Pappas is the person who found a credit card skimmer inside a pump in Franklin.

“My first thought was how many people had used that pump in the time frame when that device was put in and when I found it. We have no idea when it was installed,” he explained.

Credit card skimmers are devices designed to steal your financial information. With so many people at risk, the state is wasting no time. It has 31 inspectors and each will check about 30 gas stations. The goal is to have 30 percent of the gas pumps in Wisconsin checked by September 23.

The priority is to check high volume gas stations and locations that are close to highways. Those are often the ones criminals are targeting. They’re also targeting certain pumps, the ones on the ends.

"They do typically choose an outside pump because they know the odds are that the security camera is going to have a difficult time getting a photo of them on an outside pump installing the device," Pappas said.

All of the credit card skimmers found in Wisconsin over the last few weeks are internal skimmers, according to Pappas. They’re actually placed inside of the gas pump.

“It probably takes less than, I would say, 10 seconds with the proper keys to open the pump. You could install the skimming device and lock it back up and be done in 30 seconds without anyone knowing what you were doing," Pappas explained.

It’s nearly impossible for people to know they're using a gas pump that has an internal skimmer inside. You could be tipped off though by a break in security tape. Some gas stations in Wisconsin are using the tape as an extra precaution. If you see tape on a pump at your gas station, check it out. If it says "void," that pump may have been tampered with.

"Unfortunately, there are not a lot of gas stations that are using (the tape) currently, but I have a feeling more are going to do this type of thing now,” Pappas said.

Inspectors are also advising gas station owners to do their own daily checks. If a skimming device is found, that pump gets shut down. Then they call police.

The effort underway by state inspectors right now is a special one in the wake of recent findings, but in the future Pappas says they’ll check gas pumps for credit card skimmers during their annual inspections.

If you pay at the pump, you should check your credit card and bank statements for any suspicious activity.