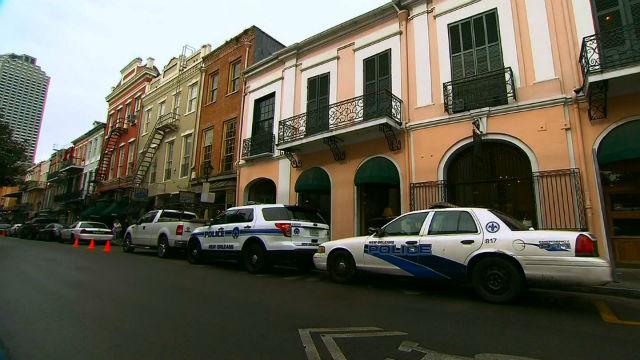 The report is full of harrowing details alleging that five New Orleans Police Department detectives in the special victims unit may have failed to investigate sex crimes over a three-year period.

But one case stands out.

According to the seven-page document released Wednesday by the city's Office of Inspector General, a 2-year-old was brought to a hospital emergency room after an alleged sexual assault. Tests would show the toddler had a sexually transmitted disease, the report said.

The detective in the case wrote in his report that the 2-year-old \"did not disclose any information that would warrant a criminal investigation and closed the case,\" the inspector general's report said.

The detective -- identified only as \"Detective A\" -- is one of five officers whose reports were examined in the investigation. Only nine detectives worked in the special victims unit during the period that was investigated.

The detectives are not being identified because of the ongoing investigation, but their names have been provided to the NOPD's Public Integrity Bureau, the inspector general's report says.

Though the detectives weren't identified, Inspector General Ed Quatrevaux said they were not rookies. Police Superintendent Michael Harrison said the detectives were \"seasoned,\" and some had been with the NOPD for more than a decade.

\"These people should have known... the right way to do things,\" Quatrevaux said.

'Not a word, even a single word'

The Public Integrity Bureau identified 1,290 sex crime-related calls assigned to the five detectives and determined that in only 179 instances -- 13.9% -- did the detectives file \"supplemental reports documenting any additional investigative efforts beyond the initial report; these 179 supplemental reports were the total written investigative product of the five detectives for sex crime-related calls for service for three years.\"

When officers file an initial report, it's intentionally short and vague so as not to identify the victim, Quatrevaux told CNN. The report mentions the assault and the location and notes that a supplemental report will follow, he said.

Because of the void of information in those 840 cases, the inspector general's report said, investigators \"could not analyze 65% of the sex crime-related calls for service assigned to the five detectives.\"

Of the remaining 450 calls that were designated as rape, simple rape or indecent behavior with a juvenile, documentation suggests the five detectives followed through in less than 40%, or 179, of the cases, the report said.

How many victims denied justice?

The findings leave Quatrevaux wondering \"how many potential sexual assault victims are out there without justice.\" He further called on the Public Integrity Bureau to launch investigations into police misconduct.

He couldn't speak to the motivation, he said, but his office's findings point to an \"organization whose culture has evolved to where this level of work is not that unacceptable.\"

Harrison, who took the department's reins from Ronal Serpas in August, months after the incidents in question, said he was disappointed by the report, which makes him realize there's more work to do within the department than he originally thought.

Serpas was superintendent for the entire period under investigation. He was named chief in 2010, about two years before the Justice Department announced an overhaul of the NOPD because of its history of corruption, excessive use of force, illegal searches and widespread racial discrimination. Last year, a court approved a settlement resolving the Justice Department investigation.

The department has transferred the five detectives to \"patrol-related duties\" and has instituted policies to ensure cases are being thoroughly investigated, he said.

\"Yes, they are getting paid,\" the superintendent said of the detectives, \"and now there's an internal investigation to find out if there are departmental infractions or criminal laws that were violated.\"

In another alleged sex assault cited in the report, a juvenile went to an emergency room and spoke to a specialist who reported that the child gave \"specific information\" about sexual and physical abuse perpetrated by \"a named individual who was living in the same house with the juvenile.\" That person was a registered sex offender, according to the report.

Detective A wrote that the child disclosed no information about a sexual assault and closed the case \"due to a lack of evidence,\" the report said.

Quatrevaux said these sorts of allegations were concerning because \"if we're not going to pay attention to what's in the medical reports, then I don't know how we could even get to these sorts of crimes.\"

In another similar case more than two years ago, Detective E was assigned two cases in which the victims underwent sexual assault exams yielding documentation of physical injuries and other potential physical evidence.

The Louisiana State Police DNA Laboratory contacted the NOPD to say one of the specimens matched DNA from another crime scene, but the NOPD still has yet to submit \"a reference sample to confirm the match,\" the report said.

In the other case, the DNA lab told NOPD it had submitted an incorrect kit, but \"the NOPD has not responded,\" according to the report.

A review of the DNA Laboratory's records shows that as of October 13, 2014, the NOPD has failed to respond to 53 state lab requests for \"reference samples\" to confirm that DNA obtained in an investigation matches DNA in an FBI database, the report said. The requests date back to July 2010.

Another portion of the report homes in on Detective D, who, according to the investigation, was given 11 simple rape cases over the three-year period.

Of those 11, five had no supplemental reports, one had no file at all and one was taken to prosecutors, the inspector general's report said.

\"Detective D told at least three different individuals that Detective D did not believe that simple rape should be a crime,\" it said.

Among the other allegations in the report:

-- A victim told Detective B she was sexually assaulted and robbed of her iPhone, but there is no documentation indicating police tracked the phone;

-- A victim told a nurse before a sexual assault exam that she was receiving threatening text messages from her assailant, but there is no documentation Detective D tried to obtain phone records. Detective D also never submitted the rape kit to the Louisiana State Police DNA Laboratory because, the detective wrote, \"the sex was consensual\";

-- Detective A was assigned two cases in which infants were taken to the emergency room with skull fractures. In one case, a nurse suspected \"non-accidental trauma, but Detective A did not investigate. In the other case, a doctor found a previous skull fracture and the infant's mother gave conflicting accounts of what happened, and Detective A determined there was \"no cause for criminal action.\"

-- Detective A was given 13 total cases, including the aforementioned, in which potential juvenile victims of sexual or physical abuse were still in the home where the abuse occurred. Eleven of those cases had no documents showing \"any investigative effort beyond the initial report.\"

-- Detective B was given three cases in which the state laboratory identified DNA evidence, but there are no documents indicating a follow-up investigation.

-- In 2013, the inspector general requested supplemental reports missing from case files belonging to Detective C -- three from 2011 and one from 2010 -- but after the reports were submitted, investigators learned all four reports \"were created on the same day in 2013, shortly after NOPD received the OIG request for the missing reports.\" Investigators determined the same thing happened with a 2010 and 2011 reporting missing from Detective E's files;

That last example was \"perhaps the most egregious,\" Quatrevaux said.

\"The auditors point out that they didn't have certain case files and asked the NOPD to send it to them,\" he said. \"We got the cases a few days later, but when we checked with the (NOPD information technology) department we found that those records were post-dated two and three years. ... They were created when we made the request.\"

It began with a few dozen reports

The probe began when the Office of Inspector General's investigations division reviewed 90 sex crime-related reports acquired by the audit division.

A May audit report cited a litany of violations of NOPD practices and policies, including mis-classifying crimes, failure to investigate, incomplete incident reports, failure to remit items to Central Evidence and Property, failure to maintain documents and backdating supplemental reports.

Investigators then identified detectives who either failed to provide documents showing they investigated the cases or \"provided questionable documentation,\" the report said.

Of those 90 cases, six reports had been created later than the date stated on the report, seven had no supplemental reports detailing investigative efforts and four contained information that didn't match medical documents, according to the inspector general's report.

The curious documentation led the investigations division to review every case assigned to those five detectives from January 2011 to December 2013. They listened to audio tapes, interviewed nurses, visited the property room, examined the record on rape kits and talked to state police to put together the \"full picture,\" Quatrevaux said.

The inspector general told CNN he'd never seen anything like this, \"not in terms of the volume, the wholesale nature of it.\"

\"There's so many cases where the documentation suggests nothing was done,\" Quatrevaux said. \"We don't know that for a fact, but we're missing the documentation. That's what we need to have because the documentation is the evidence of investigative effort, and if it's not there, then obviously we're going to think it doesn't exist.\"

The NOPD's special victim's section is composed of the sex crimes, child abuse and domestic violence unit and \"has the responsibility to handle the investigation of all rapes and attempted rapes, sexual batteries, and carnal knowledge cases (except in child abuse cases),\" the department's website says.