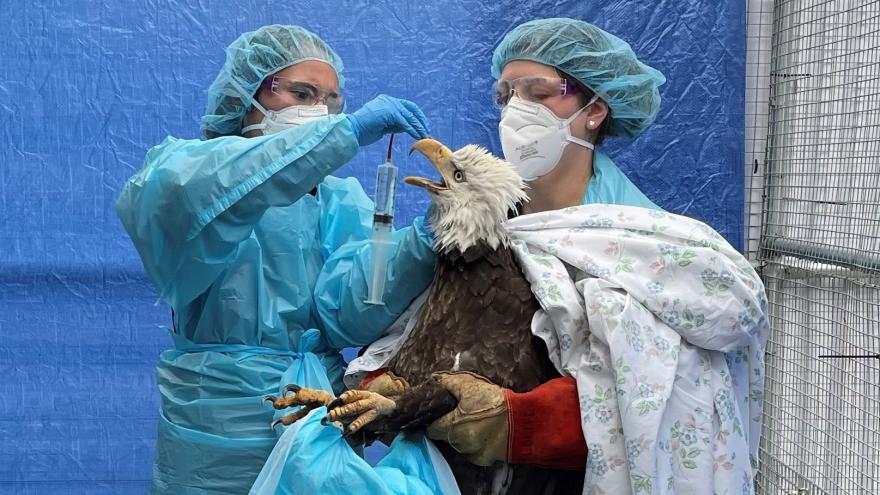 According to Wisconsin Humane Society, "Since her admission, we’ve been providing supportive care, but despite our best efforts, her condition declined rapidly, and she showed significant neurological problems. We’ve been consulting with veterinary and disease experts since her arrival, and hoped to see signs of improvement today. Unfortunately, she had a severe seizure, went into acute respiratory distress, and could not be saved. She was humanely euthanized. Her symptoms were consistent with HPAI, the Highly Pathogenic Avian Influenza, although we can’t confirm that was the cause of her illness until test results come in, which will take several days. We know how passionately the Bay View community cared about the pair of Bald Eagles nesting in their neighborhood, and we cannot thank our whole community enough for your compassion. We appreciate the counsel from our consulting veterinarian, numerous medical specialists, and officials with the DNR, whom we have been working with closely on this highly transmissible virus. We are mourning the loss of this eagle alongside our community."

MILWAUKEE (CBS 58) -- Wildlife rescue rehabilitators were called to Bay View neighborhood on Friday afternoon due to reports of a potentially injured or sick Bald Eagle in the front yard of a residence.

Neighbors and observers reported that the animal didn't flee as humans gathered and observed its condition. Bald Eagles generally avoid human interaction and not fleeing in the company of nearby humans can be an indication of distress.

In a harrowing scene (video below courtesy Tracey Blaszczyk) rescuers wearing health and safety attire captured the animal, which attempted to escape but was unable to fly.

Wisconsin Human Society says that with the help of a Wisconsin Department of Natural Resources (DNR) warden they were able to safely contain and transport the bird to their facility (pictured above, photo courtesy Wisconsin Humane Society).

According to Wisconsin Humane Society, the eagle is currently in quarantined care, being monitored for illness, including the Highly Pathogenic Avian Influenza (HPAI). They say the female eagle is receiving supportive care, including fluids and pain medication, and her prognosis is very guarded at this time due to her symptoms.

News of this bird's health arrives on the tail feathers of confirmation that Bald Eagles are once again nesting in multiple locations throughout Milwaukee County. Milwaukee was the last county in the state to have Bald Eagles nesting since the species rebound following the banning of DDT, an insecticide that weakened egg shells and decimated the Bald Eagle population. Bald Eagles are native to Wisconsin.

Wisconsin Humane Society says there has been resounding community concern and support for the health of this Bald Eagle.

The DNR is asking the public to contact them with reports of waterfowl, water birds, raptors (especially Bald Eagles) and avian scavengers such as crows, ravens and gulls showing tremors, circling movement, or holding their heads in an unusual position. These symptoms may be a sign of HPAI.

These reports can be made to the DNR Wildlife Hotline by emailing DNRWildlifeSwitchboard@wi.gov or by leaving a voicemail message for a return phone call at 608-267-0866.