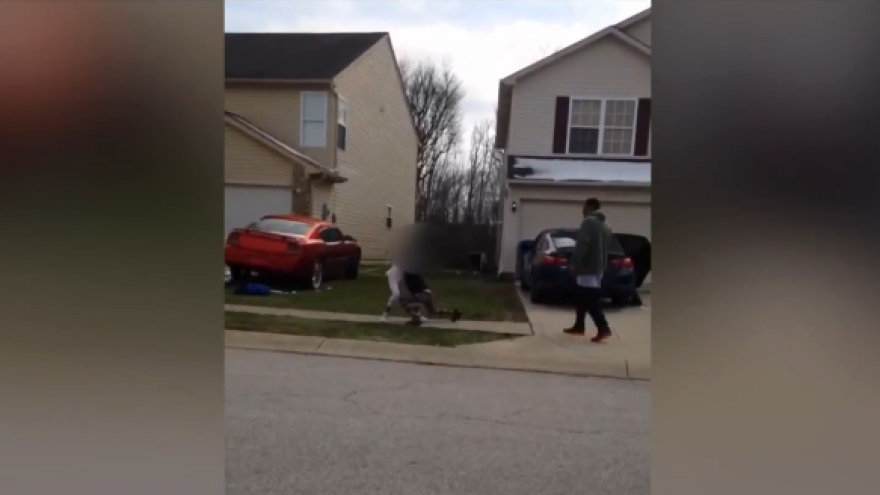 INDIANAPOLIS, Ind. - (FOX 59 VIA CNN) An Indianapolis man is behind bars for allegedly punching a young girl during a fist fight between children.

The brawl was recorded on cell phone cameras this week in a neighborhood near 42nd and German Church.

With fists flying, two girls, ages 10 and 11, fall to the ground and a 36-year-old father is seen leaning in and punching one of the girls.

“It’s ridiculous. I would not want anybody to hit my child like that. I would never do that with my child either,” said neighbor Jennie Collado.

The video recorded by one neighbor across the street shows the suspect also recording the fight on his phone and even giving the girls some instructions.

“Hit her! With your fists. Ball your fists up,” yelled the suspect.

After police were called, they arrested Spencer Woods for felony battery on an underage child.

“It’s appropriate for him to be charged with that. It doesn’t make sense for a grown up or adult to encourage behavior like that,” said Collado.

According to the affidavit, Woods told police, “His daughter was being constantly bullied. Once the girls got off the bus, he wanted them to fight to ‘end the issue’.”

Near the end of the 40-second melee, Woods can be heard taunting one of the girls as she walks away.

Neighbors like Jennie say adults need to act like adults, which she says clearly didn’t happen in this case.

For now, Woods is being held in jail on a detainer by the parole board because court records show in 2011 Woods was charged with reckless homicide and convicted of operating a vehicle while intoxicated resulting in a death.

Being recorded taking part in the fight may have violated the terms of his earlier release.

The suspect is due in court on the felony battery charge next month.