In Louisiana, Acts of Kindness Flourish Amid the Misery 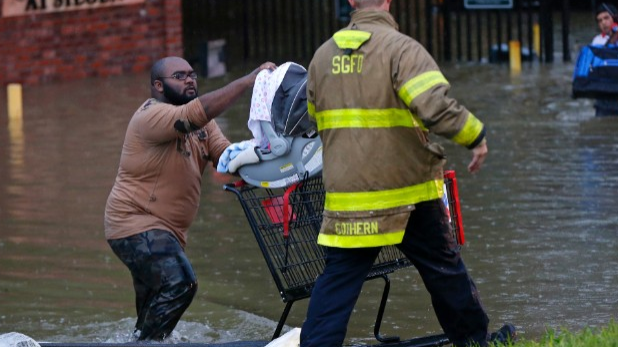 (CNN) It's said that the worst of times can bring out the best in people.

We've seen it over and over whenever tragedy has struck. And we're seeing it again in Louisiana, dealing with the worst disaster in the United States since Superstorm Sandy.

Thousands have lost their homes. But thanks to the kindness of strangers, both in their community and elsewhere, they have not lost hope.

Here's how people are helping out:

When floodwaters hit the animal shelter in Denham Springs, the staff was forced to open kennel doors and let dogs swim out and climb onto rooftops. Volunteers used boats to take about 35 animals -- including dog, puppies, cats and kittens -- to higher ground. Those whose homes aren't flooded then took in the animals. Others pledged more than $110,000 on a GoFundMe page to help rebuild the shelter, which was flooded to the ceiling.

One trucker, hauling produce out of New Orleans, was stranded for hours on an interstate. So instead of letting the produce just rot, he got the OK from his bosses to open up the back of the rig and share it with other stranded motorists, according to CDL Life, a trucking website. But that wasn't the only Good Samaritan trucker on the road: Other truck drivers let moms with young kids sit in their air-conditioned cabs to get out of the heat; another made a big batch of spaghetti and announced "it's ready!" with a blast of a truck's air horn.

They looked out for their neighbors

Denham Springs residents John Kay and Amanda Kay were on vacation in Austin, Texas, when the floods hit. Unable to go home, and unsure what condition their home was even in, the Kays started collecting supplies for other flood victims, according to CNN affiliate KSLA. Earlier this week, a tractor-trailer and van full of the supplies arrived at four shelters in Lafayette. Then on Thursday, the Kays returned to their own home -- flooded with six feet of water.

They paid for others

A man paid the $350 bill for a flood victim at a Walmart in Marksville, according to a Facebook post from Love What Matters, which chronicles everyday acts of kindness. He pulled out his credit card and paid for the flood victim's supplies -- which included basic items like toothpaste, a toothbrush, shampoo, shoes, clothes -- after she told the man she had lost everything in the floods. "And just like that, the man handed the cashier his credit card and paid for the woman's things," the post read. "She cried, his wife cried, and then I cried. It was so touching to see someone be so selfless, especially in this trying time for Louisiana! Pay it forward."

They sent in a truckload of supplies

Before he became a star player and coach in the NBA, Avery Johnson was a standout basketball player at Baton Rouge's Southern University. So, when the floods hit, he sent a semi full of supplies to the city. The truck was filled with water, soap, towels, clothes and other much-needed supplies, according to The Advocate newspaper. Athletes at Southern unloaded the truck and helped distribute items. Johnson, now the head basketball coach at Alabama, said sending the truck was "just a small showing of love and support for a community that's dear to my heart."

They knew that little things go a long way

Volunteers from a Baton Rouge hair salon handed out snow cones to people living in shelters.Studio Gabriella posted a short video on its Instagram page, saying "it's definitely the little things we can do for one another that make a big difference!"