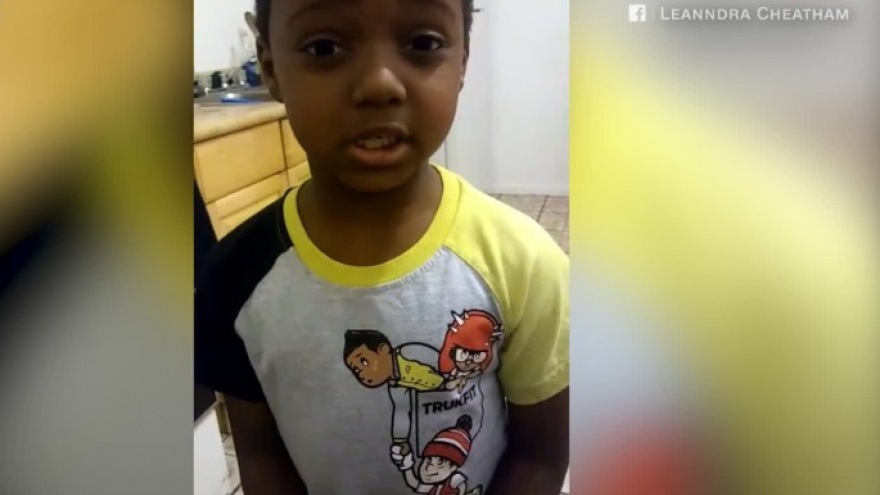 Jeffrey Laney of St. Louis apparently has had it up to here with the violence that he's seen in the city.

So he's talking about it -- his frustrations and his fears -- in a four-minute video that his mom posted to Facebook Live last week. Since then it's been viewed more than 130,000 times.

"People need to stop killing each other around here because this is just making me feel bad," Jeffrey says in the video, while standing in what appears to be a kitchen.

Jeffrey's mother, Leanndra Cheatham, tells CNN the conversation that sparked his video speech was an upcoming event by James Clark, a local activist who does community outreach in St. Louis.

The violence has hit close to home for Cheatham's family, too. She says her 16-year-old cousin was shot to death outside of his school last month.

Cheatham never imagined this video of her son would go viral.

"I post plenty of videos of him," she said. "I never thought this could've happened."

Cheatham thinks "it's a little disturbing" that her son is so aware of what's going on in St. Louis. She wants him to be able to just be a child.

But Cheatham says that Jeffrey sees the news and has been part of local events where gun violence is a topic.

If the video "changes the mind of a few or even if it's just one person," she considers that "a job well done."

"We gotta value life," she said.

Cheatham also says Jeffrey is excited about the video being so widely seen.

"He said, 'Mommy, we're going to get people to stop killing each other.'"

To this, Cheatham replied: "I believe you, son."