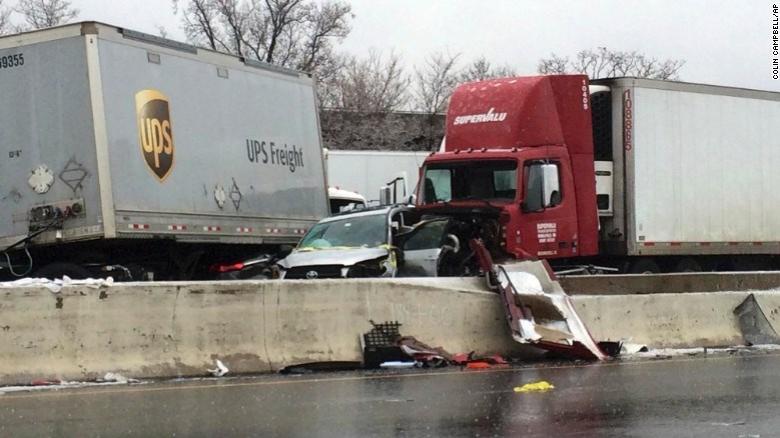 (CNN)Blasts of cold air mixed with freezing rain have created treacherous road conditions throughout the United States over the weekend, causing multiple-car pileups and fatalities.

At least six people died in Virginia, Maryland and Oklahoma because of the dangerous road conditions, authorities said.
A 55-vehicle crash on a icy stretch of Interstate 95 in Baltimore, Maryland left at least two people dead and motorists stranded for hours about 5 a.m. Saturday, according to Chief Roman Clark, a Baltimore Fire Department spokesman. Fifteen people were taken to hospitals.
A video posted on social media showed a fuel truck flipping over a median on the interstate near the Washington Boulevard exit before erupting in flames. A man is heard asking, "What is going on?" as flames and dark smoke rise from under the highway.
Baltimore Mayor Catherine Pugh said good Samaritans helped pull people out of cars.
"This is the worst accident that we've seen," she said.
Emergency vehicles descended on the scene, stalling traffic for miles and leading authorities to urge stranded motorists on both sides of the interstate to "remain warm and calm and shelter in place" in their cars, Clark said.
The cause was under investigation, but Clark described road conditions as "very slippery."
In northern Virginia, authorities responded to more than 40 traffic accidents, some involving multiple vehicles, according to the state police.
One person was killed after a multi-vehicle crash at 5:12 a.m., Saturday, on Interstate 495 in Fairfax County, police said.
The man appeared to have been involved in a 23-vehicle collision -- including two tractor trailers -- under "slick and treacherous" road conditions, according to the state police. His body was found on the shoulder of the interstate about one mile north of the accident scene. An autopsy was to be performed.
On Thursday, three people were killed in weather-related accidents around Oklahoma City, the Oklahoma Highway Patrol reported.
At Dulles International Airport, just outside Washington, D.C., icy conditions forced the closure of runways for part of the morning. Two runways were reopened about 11 a.m. Saturday.
Nationally, there were 2,000 flight cancellations, according to FlightAware.
Share this article: