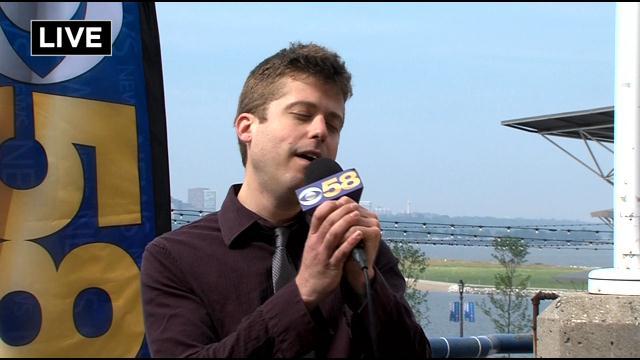 He's the homegrown vocalist who has been named top singer at the Waukesha County Fair, with a guest performance with the Beach Boys to his credit.

Ian Ash of \"Ian & the Dream\" was a special guest on the CBS 58 News at 4 p.m. Tuesday right before his set on the KNE New Music Stage at Summerfest.

\"It's going to be a good time.\" Ian explained. \"Positive energy, playing from pure emotions and living in the moment.\"

Two high school best friends formed the group back in 2008.

Both had been individually very active in Milwaukee's music scene by then.

Ian had won the Summerfest Pepsi Talent Search at the tender age of 13 and Bassist Chivo had been playing hard rock on several different projects.

Together they competed in the Bodog's Battle of the Bands and were named the “Best Milwaukee Band,” landing them performances in front of larger crowds such as the Metro and House of Blues in Chicago.

Ian's vocals earned the praise of Grammy award-winning Beach Boy Bruce Johnston which encouraged them to pursue their dream.

They have collaborated with Stephen Short, a Grammy award-winning record producer, who took them to the famed Sonic Ranch Studios in Tornillo, TX.

Short produced an EP that brought out the best elements of Ian & The Dream: concise pop songs with uplifting honesty and emotion. How fitting that Ash, a songwriter who sat inside dissecting Beatles songs growing up, would get to work with Short, a sonic wizard who had worked intimately with Paul McCartney in the seventies.

But the true test of an artist is outside the studio and Ian Ash blew viewers away when he sang with heart, soul and skill during a live broadcast of the CBS 58 News.