How I built the Millennium Falcon: Creating the galaxy's fastest hunk of junk 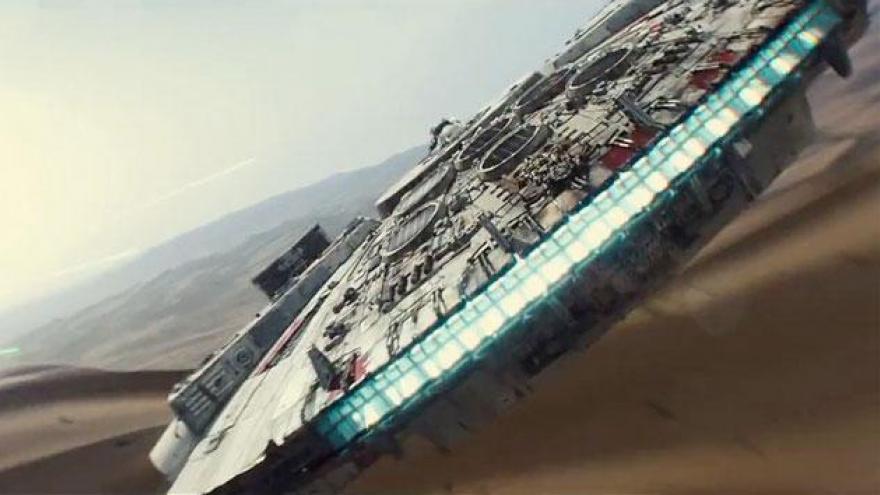 By Thomas Page for CNN

(CNN) -- How do you make a spaceship that can fly the Kessel Run in less than 12 parsecs? Simple: fit it with twenty jet engines.

That's what set decorator Roger Christian did when crafting the legendary Millennium Falcon, Han Solo's unreliable but much-loved hunk of junk from the Star Wars saga.

Christian was responsible for dressing the sets on the original film, and won an Academy Award for his efforts. He's also the brains behind many of the series' most iconic settings and props, among them Luke's lightsaber and Han's blaster. His ingenious approach was integral to the look and feel of Star Wars, and his stories from the shoot have passed into fan folklore.

As the release of "The Force Awakens" approaches, we sit down with the Academy Award-winner and member of George Lucas' inner circle to discuss the evolution of the series, where Lucas went wrong, and the fate of Luke Skywalker.

It was always Christian's intention for the Millennium Falcon to "look like an old car that had been repaired many times; rugged and dripping with oil." And in creating Solo's second-hand smuggling vessel, he took a very literal approach.

The move was one born out of necessity. Christian and young director George Lucas were trying to find a way to make their ambitious indie flick with a meager budget of $4 million.

"I was sent off in a light aircraft to airfields around the south of England to source scrap metal," Christian recalls. "No one wanted it, and it was sold by weight. Luckily, because they were from planes all the materials were light... I could buy half a plane for $75."

Christian remembers the moment clearly: "without even looking at me Frank said 'You're mad boy, you know that?' I was crossing my fingers. I had no idea whether any of this would actually work."

Work began breaking down jet engines and fuselages, and installing the components on what became the cockpit, hold and corridors of the Millennium Falcon.

"The cockpit was the first set we ever build," says Christian. "I just kept having to buy more and more junk. It was eating it up... Then I gave the set a spray to make it look grimy. Suddenly it just looked real."

Return of the Dice

The Millennium Falcon was still incomplete however.

"I said to George, 'You know in American Graffiti, you hung dice in Ron Howard's car? That film was a success -- I think we should hang a pair in the cockpit for good luck.'

"I gave him six choices," remembers Christian, "including big furry ones, but he went for a little chrome pair."

Eagle-eyed Star Wars viewers will notice the dice in the Millennium Falcon, but they mysterious disappear after three shots. "The dice were removed by the art director whilst I was working on a different set," Christian says. "They never made it back on screen after then."

Until now, that is.

Christian says a Redditor informed him that the dice were spotted hanging from the cockpit ceiling in Annie Leibowitz's "The Force Awakens" Vanity Fair cover in May.

"J.J. Abrams had seen the dice," Christian explains. "He got an assistant to search Ebay for weeks and weeks until they found the exact same ones that I'd put in. Pretty amazing, right?"

So what does Christian, a vanguard of the original trilogy, think of the new director?

"I think he's been very reverent," he says. "J.J. is a very smart director... he knew which way the series had gone, and had to get that feel back."

Christian, who was also a second unit director on "Return of the Jedi" and "The Phantom Menace," welcomes the return of a nuclear cast and tactile, practical effects to the series.

"CGI is a big issue for me... it distances you," he argues. "Looking back, I think George did the right thing. No one had done what he did before -- there were something like 3,000 to 3,500 CGI shots in 'The Phantom Menace' -- but I think when he looked back he realized that with the small cast, people really connected with that."

However Abram's hand may have been forced. Christian reveals that Disney cut "The Force Awakens'" post-production schedule by an entire year. The choice was easy: it's "far more reasonable to do practical effects."

An elegant weapon for a more civilized age

Perhaps the most intriguing question raised by the trailers for Abram's film is the fate of Luke Skywalker. He's been notably absent in promotional material, however there's something of his that has re-emerged in the Star Wars universe.

Luke's lightsaber, given to him by Obi-Wan Kenobi and cut off along with his hand by Darth Vader in "The Empire Strikes Back" has found itself a new owner in Finn, played by John Boyega.

Christian is none the wiser as to how this is comes to pass, but he's glad to see one of his own prop designs back on screen.

"I knew the lightsaber would become an icon," he explains. "I struggled making one. Special effects made some, but George always rejected them."

But the prop maker struck lucky when he came across a Graflex flashgun handle at a camera store in London.

"It was heavy and solid," he says. "I bought two and took them back. I attached rubber to the base, some bubble strip from an old calculator, which fitted the width of the grip. I added some chrome over the logo... it was perfect. I took it to George and he just smiled -- George's smile is like the biggest compliment you can get."

Now in the hands of Finn, Christian believes the lightsaber is integral to the plot.

"J.J. knows each trailer is probably the most analyzed in history. The fact that the lightsaber is so prominent won't be a coincidence... it's going to be the Holy Grail in some way."

Christian is happy to stay in the dark for now. He may be one of Lucasfilm's oldest employees and a personal friend of George, but at heart he's first and foremost a fan.

"I just want to go and be absolutely surprised."