How a Ripped-up Dollar Bill Reunited Friends After 40 Years 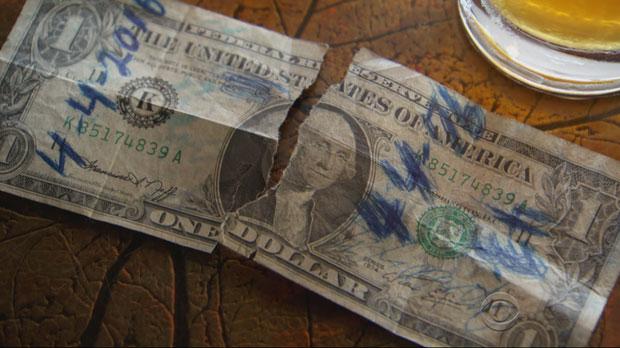 WEST PALM BEACH, Fla. (CBS NEWS) -- Steve Morris is waiting for an old friend, hoping this guy he hasn't seen in years and completely lost touch with will suddenly appear just like he promised 40 years earlier.

"I remember Joe reaching into his wallet and pulling out a dollar, and he tore it and I got my half and he got his half."

The point was, no matter what happens, 40 years from that day they would meet back at that same spot. "Saved it for 40 years," Steve said.

They each left the bar that night with half of the dollar bill. On one side, they wrote that day's date, 4-4-76. On the other, their far-off reunion date of this past Monday, April 4th, 2016.

Growing up in West Palm Beach, Florida, Steve Morris and Joe Whitehead were best friends. They even went on a cross-country road trip together.

But that was then. Shortly after the trip, Joe moved away and they lost touch. Decades passed. But all the while, Steve held onto his half of the promise, hoping Joe would too.

"If he ever even cared, I didn't know," Morris explained.

What are the odds of Joe caring enough to keep the promise? Not many guys would hold onto half a dollar bill from some drunken night 40 years earlier. "Those odds have got to be astronomical," Steve said.

And yet, guess who showed up at the bar this week -- right on schedule.

A few months ago Joe called Steve out of the blue to remind him of their date. And when Joe showed up, he had the other half of the dollar bill.

"It means so much that he had the same thoughts," Steve said. "I just went under the broad assumption that since I did, he did," Joe explained.

The old friends spent a couple hours turning back the clock, catching up on family, and making plans for the future. Steve came prepared with another dollar to mark their next visit.

At one point or another, we all lose track of at least some of the people who made us who we are. But Steve and Joe prove it's never too late to reconnect.

"I mean, if there's one person that you'd like to talk to, go back and talk to them. If they're not around, you'll regret it," Steve said.